Links: Lunch with Kenny and Charles 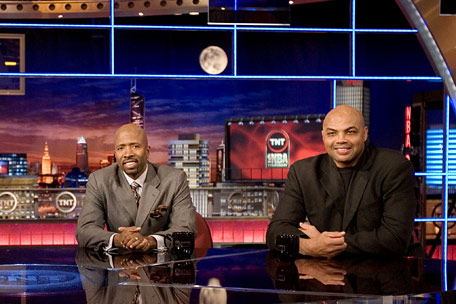 So our friends at Turner Sports held their annual preseason media luncheon for a handful of writers (including myself and Ben Osborne) earlier today. Surprisingly, there was no mention of Frank Caliendo, Steve Harvey or Kyra Sedgwick as “The Closer.” Between Charles Barkley, Kenny Smith and Turner Sports president David Levy, however, there was plenty of great basketball talk. Here are some notes I took between laughs…

• When Barkley walked into the conference room on the 10th floor of the Time Warner Center in Midtown Manhattan, he said, “Hey Kenny, let’s ask for a raise here in front of everybody!”

• After it was announced that anything said during the entire lunch would be on the record, Chuck said, “I never understood ‘off the record.’ You can’t just say crazy sh*t and then say it’s ‘off the record.'”

• Charles said he’s excited about the upcoming season and that he likes the Lakers to win the title “clearly,” as long as Andrew Bynum is healthy.

• Kenny said “the top four teams are all equal,” but he never said which teams he ranks as the top four. Kenny did say he’s picking the Houston Rockets to win it all because they’re deep and can match up with any team in the League. Charles likes Houston, though he thinks Ron Artest is “wrapped too tight.” Chuck said the first month of the season will tell us everything we need to know about the Rockets.

• Kenny said the Rockets can match up every great player in the League: Yao Ming can guard any center, Ron Artest can guard any swingman, and he thinks Rafer Alston is a top point guard. I was going to ask who exactly Rick Adelman could match up with but the subject changed before I could get the question in.

• Charles thinks people are overrating Portland, and that people should “nix” any comparisons between Bill Russell and Greg Oden, because Russell was one of the greatest players of all time and Oden hasn’t played a game, so there’s nothing in common between Oden and Russell. Except for one thing: “Other than being black, that’s about it.”

• Someone asked about the ratings bounce last year for the NBA Playoffs, and Levy said, “Bringing back strong brands is great for television.” For some reason, the writers from New York-centric media outlets — which was pretty much everyone except for me and Ben — started asking a bunch of questions about the Knicks. Zzzz…

• Levy pointed out that by NBA rules, no team is allowed to appear on TNT (or ESPN/ABC) during the regular season more than ten times. Barkley chimed in: “This theory that we can only show a team so much, that’s stupid. We can only show good teams X amount of times? Who the hell do they want us to show, Oklahoma City and Sacramento?”

• Kenny: “I’ve been on a bad team before.”
Charles: “They were bad because you were on it!”

• Charles thinks the Knicks will be better this season because they have a better coach. “This coach probably won’t try to kill himself,” he said with a laugh. Then an awkward silence fell over the room, so I asked, “Everything is on the record, right?” And it was.

• After about half an hour of talking about the Knicks, I asked what Chuck and Kenny thought about the Suns. “They’re too old,” Charles said. “The two best players are 35.” While Ben and I tried to figure out if Charles remembered that Amare Stoudemire was only 25, Chuck muttered, “I don’t like old teams.”

• One New York-based writer went back out of the room to the buffet line and filled his plate three times. I’m just saying.

• Kenny on the Knicks: “Everyone loves a train wreck. Some people like horror movies.” David Levy said he told Donnie Walsh that the Knicks weren’t on TNT at all this season and Walsh said it was OK because the Knicks “hadn’t earned the right.”

• The next thing in my notebook was this:
SO MANY KNICKS QUESTIONS!
I also underlined that three times.

• Charles said what’s happened to the Knicks the last few years is “a travesty. Patrick Ewing is rolling over in his grave.”

• Charles said he loves OJ Mayo and expects big things from him. A writer from New York said he thinks the Nets will get a big year from “Chris Roberts-Douglas.” I wanted to add that Chris Douglas-Roberts will be good, too. But I didn’t.

• Someone brought up Nielsen ratings, and Charles got all fired up. “I’ve been railing about this for years!” According to Charles, it makes no sense to give ratings boxes to small cross-sections of America and then multiply their viewing patterns out to determine what all of America is watching. “If you gave black people Nielsen boxes, ‘Sanford And Son’ would be the number one rated show in America. If you gave them to Hispanic people, Telemundo would be number one. If you gave them to rich people it would probably be…’Desperate Houswives.’ They have no idea how many people are watching sh*t.”

• About 45 minutes into the meal it was mentioned that this is the 25th anniversary of Turner and the NBA working together (five years with TBS back in the day, and 20 years with TNT). Surprising, because it doesn’t seem that long.

• I missed Ernie Johnson not being there.

• Talk turned to Turner recently taking over NBA TV and NBA.com. I wanted to suggest some really good programming ideas we at SLAM have for NBA TV, but I’m saving those in case any of the people there at NBA TV ever return my emails.

• Charles and Kenny both cautiously noted that they hope NBA TV doesn’t end up diluting what they and Ernie have historically brought on their one night a week. Charles said of Turner Sports: “I am concerned. This is going to be an interesting year for us. We have a lot of sh*t going on.”