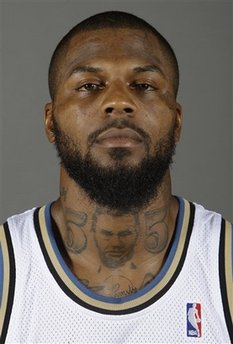 Like we always do at this time, let’s take a trip around the various team media days…

• I had to go to Washington D.C. a few weeks ago, and I read Dan Brown’s new novel, The Lost Symbol, which is set in D.C., on the way there and back. Fun book. Not exactly literature or whatever, but…fun. Anyway, the villain is a guy running around D.C. with tons of tattoos all over his body. And they aren’t broken hearts or barbed wire tats, they’re obscure things like Latin phrases and numbers and animals. His next book? The DeShawn Code.

• After a lengthy car chase, the woman was apprehended outside a 7/11 in the D.C. area.

• What’s stranger in this photo: DeMar DeRozan wearing a chef’s hat? Or that Jay Leno apparently owns a hot dog stand in the Toronto Arena?

• Scott Skiles came up with an unorthodox way to select this season’s starting lineup.

• The new Pistons prepare for this year’s match-up against Ron Artest.

• Sorry Vincent Grier, but when they’re making you pose in a uniform without a number on it, you probably don’t have much chance of making the team.

• “It wasn’t until FDR’s second term that I really started to understand how to play basketball.”

• Mark Cuban is so committed to winning that he signed Wolf from “American Gladiators.”

• This photo is representative of Boobie Gibson’s entire career.

• Try as he might, Ricky Davis can’t escape the Thunderdome.

• I knew the Kings were trying to save money, but hiring a bobblehead of Tyreke Evans as head coach seems a little extreme.

• And finally… “This is where I keep my mind grapes!”