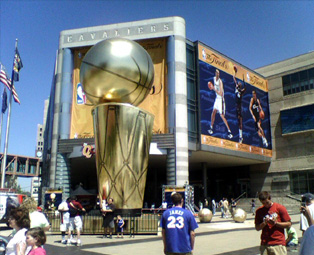 CLEVELAND — Wow. Has it really only been six days since the NBA Finals tipped off? I could probably get a better idea of things by looking in my suitcase. it’s packed half with clean clothes that I loaded up on last night at home in NYC and half with dirty clothes, in case this thing goes through the weekend and I need to get some laundry done.

I spent last night in New York, as it was Wifey’s birthday and I took her and my mother-in-law out to dinner. Got about five hours sleep, and then Sam and I flew out of New York this morning on the same flight as Stu Jackson. We were daring each other to go up and thank Stu for ruining the Playoffs just to see what reaction we’d get. He did fly first class. I was happy just to be in the exit row.

It’s gorgeous today in Cleveland — the sun is out, it’s about 80 degrees. The best thing is that it’s not 100 degrees with 100 percent humidity like in San Antonio. And as into the Finals as the folks in San Antonio were, it’s next level here. Sam and I counted 10 people wearing WITNESS shirts just walking from our hotel over to grab lunch. There are also a lot of people selling bootleg shirts with varied Boobie jokes, which are actually pretty funny. I’ll be buying one of those. And I saw a kid wearing a Varejao wig. Will not be buying one of those.

Down around The Q, people are already gathering and just kind of hanging out and taking photos. The ratings may be terrible for these Finals, but in a way it’s probably a good thing; next year the ratings will look tremendous in comparison, no matter who’s playing. But here, people are pumped that their Cavs are herein the Finals. They believe, honestly and truly, and it doesn’t seem to matter that whether the games are in Cleveland or in San Antonio, the Spurs still own a vastly superior team.

Anyway, tipoff is in about 4 hours, so I’m going to get my game face on (or take a nap).

Also, according to The Onion, Tim Duncan is rooting for the Cavs this year.

And that KFC thing with mashed potatoes, fried chicken, gravy, corn and cheese is the Northern equivalent of the Frito Pie.

Finally, the funniest video I’ve seen in a while is this.

See you in a while from The Q.