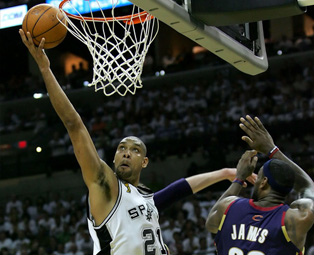 • We’re a few minutes away from tipoff and the crowd is still filtering in. This is a very polite crowd, cheering when they’re urged to, standing whenever asked. It’s a little scary to see them clap in unison along to “Boy Looka Here.” The fans aren’t particularly loud, though they are well-organized.

• Ben wrote about some of the pregame festivities earlier. While Ben was in there listening to the Sternbot, I ended up in a hallway talking to a few Cavs folk. Then Eva Longoria came through and introduced her “friend, Terry.” Yeah, like I didn’t recognize you, Terry Crews. I’m gonna tell Tony Parker about you, Terry. Boris Diaw was with them, as were about eight French guys who all looked like either Tony or Boris, all wearing Tony Parker jerseys. They may have been a boy band. Good seeing Boris, though.

• Also, because there are so many random celebrities around, you end up seeing all kinds of odd combinations of people. Best foursome I saw chatting under the stands: Dr. J, Jeff Van Gundy, Maverick Carter and Mark Jackson. I also saw ESPN head honcho John Skipper stalking around, trying to find something to do. Wanted to go up and talk Southern to him, but didn’t want to disturb him.

• I also bumped into Spurs GM RC Buford, who was wearing jeans, cowboy boots and a short-sleeved shirt. He looked like he was heading to a PTA meeting.

• The Spurs PA announcer talks like he just got punched in the nose then was immediately asked to talk following said fight.

• Jordin Sparks sings the national anthem and she does a great job. For a big girl.

• Tonight’s officials are Steve Javie, Ken Mauer and Mike Callahan, who looks like a Presbyterian minister. I actually saw Mauer this morning checking in at my hotel.

• Worth mentioning: Two years ago at the Finals I was behind the basket. Last year I was about halfway up through the stands. This year I’m in the upper deck, along with all the media. And that’s fine, I can take it. Except that I can’t see one of the baskets from my seat. Should make for two interesting games of straining and stretching.

• First possession into Duncan who gets doubled, resets the possession and hits Finley for two. Gooden responds with a charging violation.

• 3 minutes in, and the Spurs get the Cavs in a pick-and-roll. While LeBron and Zzz discuss US trade policy outside, Duncan gets a dunk.

• This kid is amazing! Jumpers, drives…Drew Gooden is really doing it all!

• 12-10 San Antonio with 5 minutes gone. Tony Parker goes down! And while he’s spreading some unpastuerized cheese on a baguette, we get a shot of Eva looking worried. Tony misses both FTs, but Tim gets the rebound, gets fouled and makes both.

• Other end, as I’m looking up Duncan’s stats (7 pts, 2 rbs), Duncan comes over to help on Bron, shoves Bowen out of the way and wipes a shot by Bron. Maybe that’s the reverse of the Bron’s dunk on Tim from back in week one? Tim should frame a photo of that play and hang it in his locker. Bron recovers enough to fire up a fadeaway three that gets nothing but rim.

• Duncan is just out of his mind right now. He spund right around Varejao in the post. Brilliant move.

• Boobie comes in red hot, draining his first three attempt. No way he keeps this up, right?

• Next time down, Duncan forces a 24 second violation.

• Finally! With 1:12 to go, Bron remembers that nobody can guard him and he blasts through the lane and to the rim. Duncan hacks him and Bron gets two freebies. Good, good. Two for Bron.

• As though they remembered the last possession, the Cavs come down on their next possession determined to create contact. Bron blasts into someone without any call, and then Horry steps in and takes a charge.

• Last play of the quarter, and it couldn’t play out worse for Bron, who dribbles the clock down and runs through Jacque Vaughn for a foul.

• That’s the first quarter, with your score San Antonio 20, Cleveland 15. And really, considering that Bron has 2 points and no field goals, and that the Cavs shot 33 percent for the quarter, being down 5 is great.

• Between quarters, a life-sized dancing grocery bag (paper, not plastic) comes out.

• Gibson checks in and gives the Cavs a little jolt, cutting San Antonio’s lead to 20-19. Cavs corral another turnover and Bron fires it off the side of the goal and about 20 rows up in the crowd. I guess he was trying to pass the ball but that thing wasn’t even close.

• Timeout with the score 20-19. Other than Duncan and Parker, nobody on San Antonio has scored more than 2 points.

• And if the Spurs could make a shot they’d be in business. Duncan catches in the post, immediately gets tripled(!) and passes out to Finley, who bricks a three. Spurs are shooting 38 percent, Cavs are shooting 32 percent.

• Ryan Jones texts to ask what’s up with Bruce Bowen. I don’t know. He’s played 11 minutes, has taken one shot and…that’s it. I think he’s more concerned with looking like Droopy Dog.

• Elson gets a nice dunk on a delayed break, on an ill pass with some crazy English from the Frenchman, TP. Spurs built it to 29-25, courtesy of a 7-0 run. Duncan gets a dunk, so make it 9-0 and 31-25. The PA guy here is really loose now, screaming with his strange voice that sounds like Ed Torian, the lie detector guy on Howard Stern.

• Elson gets a lay-up. The PA guy keeps calling him “Cisco.” They should play The Thong Song after each basket.

• Manu hits a three at the half to make it 40-35. I think at the half they should just announce that whichever team gets to 70 first wins. And give Cleveland this: They’re still plugging along at 37 percent from the floor, their best player doesn’t have a field goal, but they’re still only down five. It’s like the Spurs are toying with them.

• Halftime performance is by some guy called Clay Walker, who sings a country song called “Where Do You Go When It Rains In Mexico?” Great question, Clay. And I can’t say that I have an answer, man.

• Meant to say, I head that Hawks GM Billy Knight is in love with Brandan Wright.

• Drew Gooden opens the second half with an airball. A fitting tribute to the first half.

• Three minutes in and each team has scored 2 points.

• LeBron drives to the basket!! Stop the presses!

• Six minutes into the third, and it’s 49-43, Spurs. A miserable game thus far. Spurs are going to win. There’s no question.

• Bron and Drew Gooden run a pick-and-roll, and Ginobili and Oberto defend it perfectly. Cleveland’s lucky to get a foul call to bail them out.

• Sometimes the Spurs make it look so simple. They work it around and around and don’t cut or move or anything, and eventually Ginobili just nails a three. Meanwhile, LeBron’s 1-for-10. Cleveland’s at a miserable 37.5 percent. Ben’s talking about going to the WNBA game here Saturday night. I think we may be at one now.

• With 3:47 to go, the crowd finally spontaneously gets into it. The Spurs score back-to-back baskets to go ahead 58-47. The fans stand and roar, and then the fans resort back to their rhythmic clapping.

• During the timeout, Sean Elliott, George “Iceman” Gervin and David Robinson gather for no real reason, go stand at halfcourt and receive a standing ovation.

• After that timeout, Bron gets his second field goal. The Cavs get a stop and LeBron looks to push the ball and get something — anything — going, but the Spurs force a steal.

• Wow. Manu Ginobili draws a flagrant one on Drew Gooden on a minimal contact play. Ridiculous. If I’m in the elevator with Ken Mauer again tonight I’m going to let him hear about this.

• You know how I know the Cavs don’t have a chance? Just watch Robert Horry play defense. This dude can barely run, and he’s flying around like Manute Bol under the rim. By the way, San Antonio’s up 64-49. Anyone still think Cleveland’s going to win this series? Hell, anyone think it’s even going five games?

• Third quarter over. 64-49. LeBron is playing like that life-sized grocery bag. Duncan has quietly dropped his pants and taken a huge crap all over the Cavs.

• A three from Horry makes it 67-49. Someone on Cleveland needs to start a fight. really, just take out Duncan or Parker, because that’s the only chance they’ve got for the rest of the series. If it was up to me, I’d take out Duncan, because Parker has a huge crew in the stands.

• Anyone know who the leaaeding scorer for Cleveland is right now? Drew Gooden! That’s The Big Drizzle to you.

• As if to make things worse, the Spurs can’t miss in the fourth. We’ve got 8 minutes to go and they’ve missed 1 jumper this quarter. 72-54.

• Bron hits a three to make it a 15 point game with 6:40 left. Parker responds with a bucket. He also points out that he’s dating a starlet.

• A Pavlovic runner makes it a 12 point game with 5:20 left. In return, Duncan makes the most fundamental rebound and lay-up I may have ever seen. I think that’s it. Gotta be it.

• A few minutes later, still leading by 12, Parker runs over Varejao and is called for an offensive foul. Popovich lets him have it coming back up the floor. That’s the kind of stuff Parker and the other Spurs allow that makes them a better team than anyone else.

• A Pavlovic running reverse two-hander makes it a 9-point game with 2:35 to go. The arena is still filled.

• The Spurs play around and let the lead dwindle, giving the Cavs some hope for the future, but they hang on to win 85-76. I’m out. More tomorrow. Talk it out, peoples…