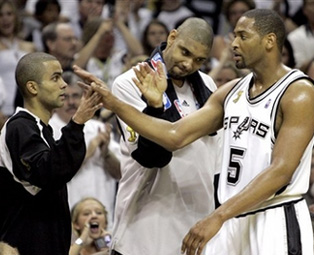 I’ve been saying for the last two days that this thing isn’t going further than five games and could quite possibly only go four games. Look, I believe in LeBron and think he is an incredible player, but there is a vast talent differential between these two teams. (Also, I wrote that sentence after the game ended.)

Let’s get to the Game Two notes…

• LeAnn Rimes drops a slowed-down National Anthem. Any relation to Busta? She has to sing a hook on one of his tracks. (PS: I hear Ben Harper is coming to Cleveland to sing the anthem. I’m hoping we get Leon Mobley with him on the percussion.)

• Same intros as Game One. More rhythmic clapping from the robotic fans of San Antonio. I’m also a little disappointed in the Spurs dance team. That’s all I’m saying about that.

• LeBron gets his first foul with 10:34 to go. Next possession, Duncan gets a foul. About a minute later, LeBron gets his second foul. Whoops! Well, Game Two was fun everyone. Catch you guys in Cleveland on Tuesday for Game Three, OK?

• It’s 12-6, LeBron is out and the Cavs just got an inbounds violation. Timeout, Mike Brown? You know, settle your troops with Bron on the bench and all that? No timeout, and Finley gets an uncontested layup. The Cavs miss a shot, and Tony Parker gets a lay-up. Now it’s 16-6.

• It would really be awesome if at some point during the Finals, Joey Crawford came running out of the locker room stripped to the waist with an assortment of expletives written on his bare skin. In blood.

• During the pregame, Ben and I were watching Drew Gooden shoot around and we noticed that he seemed to lean back on his jumpers. I assumed this was to avoid having his shot blocked. Robert Horry did not notice this, because he just swatted the crap out of Drew.

• The Spurs miss about four straight threes, and don’t seem remotely concerned. Boobie nips a three, cutting it to 16-13 with 3:50 to go in the first. Popovich immediately calls a three, probably to remind the Spurs that they HAVE THE GREATEST POWER FORWARD OF ALL TIME down there in the post.

• LeBron just ran into the locker room to catch “The Sopranos.”

• Duncan gets a break, and Francisco Elson fires up a 22-footer. He nails it, lucky for him, or Pop would’ve strangled him. When Elson scores, the PA plays a clip of “Cisco Kid.” He was a friend of mine, you know. Manu follows that with a 3, Francisco gets a dunk in transition (off a sweet no-look from Bones Barry) and it’s 23-13. With Duncan resting.

• I couldn’t really see either of Bron’s fouls from where I’m sitting, but I would bet all the money in my wallet ($32) that Cleveland fans are upset about the calls.

• Robert Horry runs like his left leg is asleep.

• Bones! Brent Barry sinks a three and the roof comes off the place. 28-13, 39.1 left. LeBron has chewed through his fingernails and is working on his toenails.

• By the way, I briefly saw a Cavs scouting report that a player had carelessly left in his locker, and on the very first line about Varejao it said, “Will flop on anything.” I’m surprised Pop doesn’t make his players eat the scouting reports after they memorize them, being a former military intelligence guy and all.

• Just before the half, Eric Snow grabs the ball, goes coast to coast and shoots a layup…that doesn’t even hit the rim. Fitting. 28-17 after one.

• Stat watch: LeBron has played 2 minutes. Cleveland has 2 assists while the Spurs have 8. Cleveland is shooting 30 percent from the floor. San Antonio’s shot twice as many free throws (8 to 4).

• Your boy is back as the second quarter starts. That’s LeBron, not me. But I’m back, too.

• Duncan scores back to back baskets to make it 32-17. Duncan turns it over and then Lebron walks because he feels bad for him.

• Eric Snow drives and draws the foul. What does it mean when Eric Snow is your team’s best player?

• By the way, that’s a 9-2 run from San Antonio to start the second. If LeBron finishes with 48 tonight, I’ll add him to my five.

• You may have noticed that in the AT&T Center there’s a huge cutout of a spur and a cowboy ringed with lights? We’re sitting right underneath them.

• LeBron finally gets to the line and shoots an airball. Goodness. What else can go wrong for him?

• He gets a dunk on the next play. So he recovered from that nicely. After the dunk I glanced up at the scoreboard and saw it was 30-22, and I thought the Cavs were really fighting their way back into the game. Then I realized it was actually 38-22. So much for that fighting stuff.

• LeBron is the beneficiary of a few questionable calls, and the San Antonio fans voice their displeasure. I wonder if Paulie Walnuts is alive.

• BY THE WAY, IF ANYONE SPOILS ANYTHING ABOUT THE SOPRANOS IN THE COMMENTS SECTION, YOU WILL IMMEDIATELY BE BANNED FROM SLAMONLINE FOR LIFE. NOT KIDDING.

• 45-26. Ben mentioned earlier that we saw Eva Longoria with Terence Howard. The Cavs should get Terence Howard to come into their locker room at halftime in character as that really good black swimming coach so he can fire them up. They’re totally drowning right now.

• Bron drives and gets another call. Tony Parker has 10 points in the paint. The Cavs have 18 points total on field goals.

• The Cavs decide to try something new so they play zone. Manu ends up getting right to the rim, where he’s hacked. Makes it, makes it. 51-27. If the Cavs were any worse they’d be the Grizzlies. And I’m not completely convinced they’re not trying to lose this game on purpose.

• I’ve been watching a lot of that show “Mythbusters” lately, and they seem to be able to build from scratch any sort of machine that they could possibly need — earlier today I saw an episode where they constructed a machine that allowed them to simulate a person trying to catch a bullet in their teeth. Well, if they made a machine that completely dismantled and humiliated basketball teams it would look exactly like the San Antonio Spurs are playing tonight. I hope that makes sense.

• The Red Panda Acrobat is the halftime show. It’s a woman on a unicycle who balances a bunch of bowls on her foot and then kicks them up in the air and catches them on her head. It would be way more impressive if they were filled with hot Ramen noodles.

• First play of the second half and the Cavs run an isolated pick-and-roll between Gooden and Larry Hughes. Drew scores, but still…strange way to set the tone.

• LeBron gets his first assist of the game with about 10 minutes to go in the third. The Cavs have 7 assists as a team. Tony Parker has 5. Larry Hughes has 1 assist in the entire NBA Finals.

• The Silver Dancers come out and do a dance routine to “Ice Ice Baby.” Ben says he doesn’t know this song has been used in a non-ironic context in years. When the Coyote joins them and does The Worm, the crowd goes wild. I think we have entered into a time warp to 1989.

• I just went to the bathroom and returned to find the Spurs ahead 76-49. Another timeout.

• Something incredible happened during that timeout: David Stern walked out on the floor and announced that the NBA Finals were over effective immediately and the Spurs were the 2006-07 NBA Champs. Stern then opened up a hatch at halfcourt and pressed a big red button underneath the court. Suddenly I was transported to my couch in New York City. It was 8:58 p.m. and I was tuned to HBO HD. “Woke up this morning…got yourself a gun…” Actually, none of that happened.

• They did play “Stand Up And Shout” from the movie “Rock Star” during that timeout. It was really effective at getting the crowd worked up. Ben is reading Curtis Granderson’s blog on ESPN.com right now. Not exciting.

• Duncan catches in the post, gets triple-teamed, finds Bowen for an open three which he misses, Duncan boxes out Varejao and gets the rebound, he lets Varejao get his footing then goes right around him and dunks. While running back up the court, Duncan also gets the digits of two members of the Silver Dancers and correctly answers every Final Jeopardy question from last week’s television broadcasts.

• A telephone just fell from the sky and landed in the press box. Not kidding about that. What else can possibly happen tonight?

• “Sisqo” Elson checks in for Robert Horry and Horry gets an ovation: 5 points, 9 boards, 4 blocks.

• Those back-to-back threes cut it to 89-70. Pop actually called a timeout because he was so angry.

• The Spurs go into their fourth quarter swoon in which they sit on a big lead and let the Cavs start scoring at will. The Cavs get it to single digits, making it 93-84, then Bron gets a three-point play and it settles at 95-87 with 4:53 to go.

• Turnover! Then Bron misses a lay-in, Tony Parker nails a long two, Damon Jones misses a three. The Spurs are doubling LeBron on almost every touch. Flip Saunders is sitting at home wondering exactly what a double-team is. Boobie feeds in a two to make it 97-89. Then Ginobili nails a three…and one! 101-89, 2:24 to go. Over, right?

• Not. Boobie tittilates a three. Duncan gets a two.

• Play of the game! Horry decides to dive for a loose ball and goes headfirst into the ad board, taking out Pop, too. Looked horrible when it happened. Horry was going about 100 miles an hour when he hit that thing.