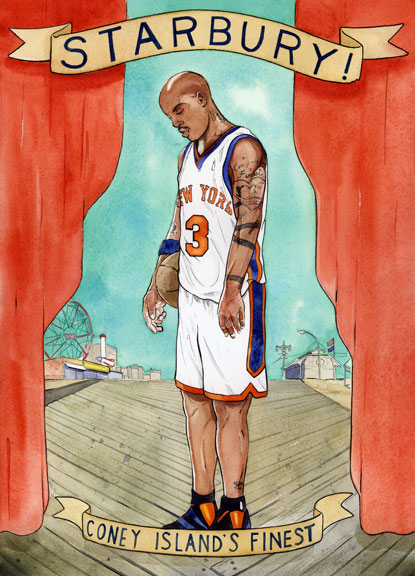 Fri-day! Yes! And I’m planning on another post this afternoon, so we’ll save other talk until then.

For now, it’s time for NBA Friday, the weekly colloboration between illustrator Joel Kimmel and you guys, the loyal Links denizens.

In the last installment, Joel dropped a great drawing of Kevin Durant. This week’s team is the New York Knicks, and Joel came with this drawing of everyone’s main man, Stephon Marbury.

As Joel says, “I wanted to paint Stephon because he was one of my favorite players for a few years. I remember when he was traded to the Knicks it seemed like he was finally going to be happy playing basketball. He was back in New York and everything seemed very promising. I remember seeing a giant billboard of Stephon in Times Square and it was exciting, I really wanted to see him do well. Unfortunately, it hasn’t worked out that well and we are all reading about what he’s going through. With all the drama surrounding the Knicks, the death of his father and his struggles on the court, I wanted to portray him back in Coney Island on an old sideshow-style poster. The poster advertises Starbury as Coney Island’s finest, but the boardwalk is completely empty, and maybe the curtain is closing — as if the once popular attraction is shutting down. A lot of his supporters have turned away, and speculators wonder when he’ll play again.”

Thanks as always Joel. Next week’s team? The red-hot Portland Trailblazers. Leave your ideas for who or what Joel should illustrate for next week in the comments section below.