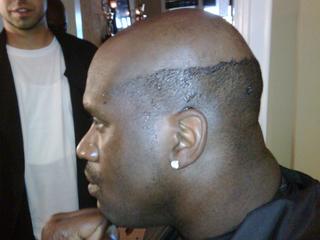 Susan asked me to do another post today on The Links because she was tired of looking at the photo of the bacon shoes from yesterday’s Links on the home page. Which is sort of ridiculous, since Susan is the most carnivorous person I’ve ever met. She literally detests vegetables, an admirable stance to take in this day and age of heightened awareness of healthy eating.

(One day a few weeks ago, Susan and I were walking out of the office together at the end of the day, and I mentioned needing to go by the grocery store to buy food to fix for dinner. Susan asked what I was making, and I told her I was leaning toward shrimp. “I had shrimp last night,” she said. I asked her what she ate with the shrimp, and she said, “Pretzels.”)

Anyway, instead of bacon shoes, today let’s rock a new photo from Shaq, one he tweeted earlier today. He posted a photo of his new hairstyle, which he referred to as a “George Jefferson fade.” Weezie!

• Wifey and I have a trip coming up this summer and I was thinking I might need to buy some outdoor-type gear. Late last night I was shopping online, looking at rei.com and some camping/hiking sites like that. Then I thought maybe I should check out the web site for Dick’s Sporting Goods.

And let me just tell you that URL for Dick’s Sporting Goods isn’t exactly what one might assume it could be. I’m still a little shaken by that experience.

• Got an email from my Dad this morning…

This morning’s AJC gives the NBA Finals matchups thusly. Do you agree?

Seems to me this gives the overall edge to the Magic.

Well, if you tabulate it, that’s Magic 3, Lakers 2, Even 2. So yeah, advantage Magic. I do disagree a little with the results of their match-ups. For instance, I’d definitely rank Gasol ahead of Rashard Lewis. And as bad as Fisher has been this offseason, I’m not so sure that he’s a drop off from Rafer — they’re about even defensively and while Fish doesn’t have the ability to explode offensively like Rafer does, perhaps Fisher’s steadier play is more beneficial to the Lakers long-term than Rafer’s sporadic performances are to the Magic.

But the real head scratcher to me is ranking Phil Jackson even with Stan Van Gundy. Really? One of the best coaches in the history of basketball is only even with the coach criticized by his own best player just a few weeks ago?

• Before the Cleveland/Orlando series, I knew the Magic had a good record against the Cavs during the regular season, but I still picked the Cavs to win it. Well, this year in the regular season, Orlando was 2-0 against L.A. (Although, as Hollinger points out, Jameer Nelson went for a combined 55 points in those two games. Jameer might be returning to action in the postseason, but there’s no way he’s averaging 27.5 ppg.)

• Thanks to Howard Beck for the shout-out today in his New York Times article about Kobe.

• Good read on Mark Cuban’s court case against the SEC. Interesting that Cuban’s lawyer wrote a book that essentially argued against the argument he’s now making on behalf of Cuban. The lesson? Never invest in a company called mamma.com.

• Hey Bulls fans, check out who my main man Chad Ford says your team is considering with the 16th pick. Tyler Hansbrough! If they draft Hansbrough, I might have to buy his jersey for Russ.

• A week earlier, C-Fizzle also had this note that I missed, which must be the grossest NBA Draft note yet…

Pittsburgh’s Sam Young is getting a lot of love after toughing it through a workout in Indiana last weekend. Young was injured in his first workout in Toronto when a piece of the device that measures vertical jumps became lodged in his left biceps while Young was testing for the Raptors.

The Raptors struggled to get the piece dislodged, and Young had to have it removed at the hospital. He had the wound bandaged with some gauze and was back killing in workouts by the end of the week.

• Our friends at Complex put together A History of NBA Sore Losers. Some good stuff in there — don’t think I’ve ever seen that Webber clip.

• Finally, I caught the new Tonight Show with Conan O’Brien last night and thought it was pretty good. They need to move Andy to the couch but all in all I really enjoyed it. Here’s a clip from the show where Conan visits a Lakers game. (BTW, I went to Hulu.com to find that clip and on the top of the page it said: “Popular Searches: The Tonight Show | Vampire.”)