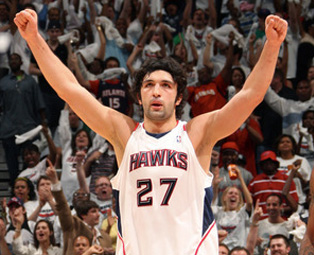 Alright, there’s still a half to play in the Utah/Houston game (and Utah’s up 15 and Rafer Alston just hobbled off to the locker room injured), but I need to post these notes before I pass out from a combination of joy, shock and incredulity.

Real quick, before we get to Hawks/Celts, the Cavs finally eliminated Washington tonight, winning 105-88 in D.C. More importantly, it puts an end to Soulja Boy’s surprising Playoff run. LeBron’s been unstoppable for the last two weeks, and he turned in his best performance tonight with a triple-dip (27, 13 and 13). DeShawn Stevenson can’t see his own face. Ryan will have more notes on that game soon enough.

Of course, my attention tonight was focused on Atlanta, where the Hawks shocked the world and beat the Celtics, 103-100. Boston led most of the way, but the Hawks kept it manageable, and after being down 3 going into the fourth, the Hawks made a run at the beginning of the quarter and didn’t look back. Even though Joe Johnson had a sub-par game (finished with 15 on 4-13 shooting), even though Marvin Williams injured his knee and had to limp off the floor, even though Josh Smith had 11 points and 6 turnovers, somehow the Hawks pulled this thing off.

I think the thing that really made a difference was that the Hawks kept attacking the rim, over and over, drawing contact and going to the line. The Hawks shot almost twice as many free throws as Boston because they weren’t afraid to take the ball to the basket. Conversely, Boston jacked up nearly three times as many three pointers as Atlanta (19 to 7) and seemed content to keep firing up shots from the perimeter.

Even though I’m a Hawks fan, even I must admit that Paul Pierce picking up his sixth foul was a terrible call from official Bob Delaney. He fouled Pierce out of the game on a play away from the ball that goes uncalled 99.9 percent of the time. Delaney also screwed the Celts earlier on a play where Zaza Pachulia (who had the game of his life, incidentally) got fouled on a lay-up by Kendrick Perkins. Delaney didn’t call the foul when it happened, but he waited until Zaza shot the ball, the ball rolled around the rim and out before blowing the whistle. Terrible night by Delaney all the way around.

Meanwhile, someone needs to get the Celts on a workout program. They looked exhausted in the second and fourth quarters, and they only scored 18 points in each of those quarters. KG was grabbing his shorts and panting, and they didn’t seem to have the legs to shoot jumpers in those fateful periods. Also, I can’t remember seeing a team that it supposed to be a championship contender with such a one-dimensional post game. Right now, all they do is toss it to KG and clear out. Why they don’t run more plays through Paul Pierce in the post, I have no idea. But I’m glad they don’t. And down the stretch the Celts ran a collection of curious plays, including having Rajon Rondo take the final three with a chance to tie it.

As for the Hawks…I probably saw them play about 70 games this season, and I didn’t even have the slightest inkling that something like this could happen. This isn’t just shocking, this is shocking wrapped inside amazing and dipped in incredible. All year they seemed to be overwhelmed in almost every circumstance, and playing a Playoff series against the team with the best record in the NBA didn’t seem to be the prescription for forcing them to come together.

But you know what? They’ve come together. And now they’re one win away from ruining the year for a lot of people. Someone send Josh Smith an Eli Manning jersey to wear to the arena on Sunday.

(By the way, Houston’s cut this thing to 4 at the half and T-Mac has 28 points. One of you commenters fill us in on how that plays out. I’ve got to go pinch myself and make sure reality still exists.)