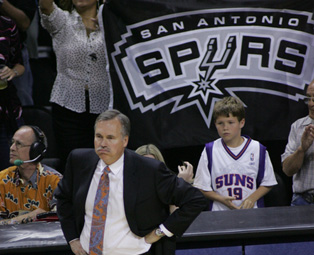 Come on, everyone, let’s celebrate the unadulterated excitement that is the NBA Conference Finals! It’s what we’ve been waiting for all year, right?

If nothing else, these Playoffs have proved that there is a huge difference between regular season NBA basketball and Playoff basketball. Playing an uptempo style may work during the regular season, but Playoff ball remains largely a land of halfcourt hoops, where being able to execute your offense and generate high-percentage shots is what wins games. I don’t have any facts or numbers to back this up; it’s mostly a generalization based upon watching way too much Playoff basketball. But if you look at the teams that advance, year after year, it seems like an accurate statement.

I do wish the Suns had gone further, because their style of play is much more accessible to the casual fan and would probably generate more general interest in the NBA than a Spurs/Pistons Finals, which seems like the inevitable match-up. And any increase in general NBA interest is a good thing for those of us who work covering the NBA. This doesn’t mean that a Pistons/Spurs Finals wouldn’t be entertaining to a specific segment of hardcore basketball fans, because San Antonio and Detroit run two of the best halfcourt offenses in the NBA. I love watching Webber make slick passes from the box, watching Rip Hamilton curl around picks, watching Tim Duncan invite double-teams and then zip cross-court passes to open guys. But that doesn’t mean the whole world enjoys this.

(A note about Duncan and double-teams: During the Spurs/Jazz game yesterday, Mark Jackson started lecturing viewers about how Tim Duncan’s brilliance at waiting for the double-team to come, taking that pressure on himself and then finding an open teammate. This reminded me of a conversation I had a few months back with Chris Paul. We were talking about LeBron, but CP3 said, “Most bigger guys, I think they tend to panic when they have the ball and defenders are coming at them. But LeBron, he welcomes that, welcomes double teams. He knows when to sit back, when to attack the double team, when to split the defense. He just knows.” And so does Duncan. I remember when I was playing high school ball, maintaining a sense of calm on the court was hard for me to do because I was constantly worried about turning the ball over or screwing up. Duncan is so good that he just doesn’t care. You could triple-team him and he’d still hold the ball for four seconds before throwing the ball to an open cutter.)

My least favorite argument this postseason is that David Stern ruined the Suns’ season. Look, I know the Suns were without Amare and Diaw for that Game Five, but unless I missed something they weren’t without them in the other three games they lost to San Antonio.

To put it simply, the Suns as presently constructed just aren’t good enough to win a title. I don’t think anyone saw this coming, but the Spurs just had too much offense for Phoenix to deal with, while the Spurs also had just enough defense to slow Phoenix down.

Does Phoenix (and Golden State, for that matter) losing constitute a grand indictment of the run-and-gun offense as never being good enough to win an NBA title? It’s at the least an interesting question. During the ’90s back in Atlanta, the Falcons hired June Jones and went to a run-and-shoot offense. Everyone said the Falcons couldn’t win a Superbowl using this offense, because it would allow opposing defenses to load up against the pass; basically, the Falcons were making themselves one-dimensional. The Falcons had the same attitude as the Suns, though: We’re going to score a lot of points, you better hope you can figure out a way to score more.

But they could never score enough to make up for the fact that they weren’t a good enough defensive team. Same has been shown to be true for Phoenix. And like the Falcons, I wonder how much of Phoenix’s defensive problems stem from them practicing against a running offense day after day?

Also, the Warriors saw their high-octane game sputter to a halt against a team more multi-faceted than they were. A few weeks ago I wrote:

Also, I don’t really like what Golden State is doing, because as I wrote the other day, there’s a certain feeling of fatalism to watching the Warriors play right now. They’re not building something for the long term, they’re not developing their young guys, they’re just trying to win that game on that night.

Which is what basketball is supposed to be about, right? In a way, but the NBA is almost as much about today as it is about tomorrow, and the “tomorrow” for the Warriors is cloudy. The way they’re constructed now, nobody expects the Warriors to win, so happening upon a win is like found money. And if they lose, they can always say, Well, we’re just doing the best with what we have.

While I understood the wild excitement that grew up around the Warriors the last few weeks, I didn’t understand how real Warriors fans could completely embrace it. Because now, once the season is over, it all becomes real once again: They’re capped out, they still don’t have a great big man, Baron can’t play back-to-backs. It’s fun while it lasts, but it never seems to last long enough.

Uptempo teams can win NBA titles, as the Lakers proved a few decades ago, but those Lakers were also very good halfcourt teams. Lesson being, if you want to win an NBA title, you better know how to play halfcourt offense. And San Antonio and Detroit do. Welcome to 2005 all over again.

One last thought: Over in the East, I think the Pistons are going to handle the Cavs pretty easily, but if there’s any one player left who can deal us a surprise in the Playoffs, it’s LeBron James. LeBron has been oddly quiet throughout the entire postseason. Anyone else think he could be saving a little something for the rest of us?