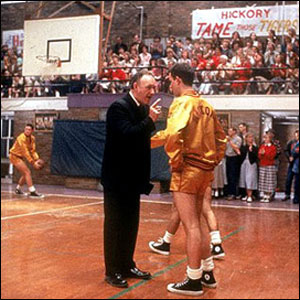 Because the Ricky Rubio thing in Minnesota won’t go away, a few things about that situation to start today…

In new L-Wolves GM David Kahn’s interview with Henry Abbott earlier this week, Henry mentioned something about the Rubios not going out to visit Minnesota since the Draft, and Kahn responded, “You presume he hasn’t been here to visit.” Then he started talking about something else.

Why did he answer this way? He didn’t say Ricky had not been there, but at the same time he didn’t do anything to try and reassure the fans by saying that Ricky had in fact been to Minnesota for a visit and meeting. I know it was mentioned last week that Rubio might be visiting the Twin Cities, and then Kahn skated around it.

But from what I was told this morning, the Rubio family did visit Minnesota and met with the team last week.

(I reached out to the Wolves this morning and asked if this was correct. I was told: “No comment.”)

I’m not sure why all the cloak and dagger stuff from the Wolves. Someone I spoke with the other day assured me that Kahn understands a lot more than he’s letting on, that he’s just trying to underplay everything right now. Maybe so. But I still feel a big part of a GM’s job, especially in a market where your team hasn’t won in forever, is to keep the fans at the very least feeling engaged in what your team is doing. And I don’t get the sense that Kahn is doing that.

(BTW, when googling Rubio/Minnesota stuff this morning, I stumbled across an ideal place for the Rubios to hang out should Ricky end up playing in Minnesota.)

Also regarding Señor Kahn…I was IMing with an NBA person the other day who didn’t agree with my criticism of Kahn for drafting Ricky despite knowing he didn’t want to play there. If Kahn had not taken Ricky with the 5th and 6th pick, this person said, he’d be getting killed for passing on maybe the best player in the Draft, twice.

Perhaps. Although four other GMs passed on Ricky also. To me, you don’t pick players based on what you want people to think about you. That’s what you worry about after you put your team together. You pick players based on who can help your team. And while Ricky could definitely help the L-Wolves, he can’t help them unless he wants to play for them. And from everything I’ve read, he kind of made it clear he didn’t have any interest in playing for the team.

OK, that’s it. No more L-Wolves stuff. Been writing about them so much this week I feel like Myles.

• On Twitter the other day I received two DMs from my guy Geoff, who asked the following…

Besides watching games, reading news…any other good resources/books, etc. I can consult to be a more educated basketball fan? Basketball seems as abstract as soccer, but there are a lot of things about the game I just don’t know still. One of most neglected sports.

Great question, and one that I didn’t think I could respond to in 140 characters or less.

There are a lot of really, really good basketball books and films out there. I could probably recommend a dozen of each off the top of my head, but I want to keep it simple, at least my part of this. And I know we can name a lot of movies (“Eddie!”) and books, but I want to just suggest the best.

For movies, you have to see “Hoop Dreams,” if you haven’t already. I watched it again recently on cable, and even now, when we’re used to behind-the-scenes footage of stuff, it’s a very, almost uncomfortably real look at what it’s like to be a young kid in love with basketball. You also have to see “Hoosiers,” and “White Men Can’t Jump,” while you’re at it.

(BTW, for what it’s worth, my favorite sports book of all time is a soccer book, Nick Hornby’s “Fever Pitch.” If you’re a die-hard fan of a team, in any sport, you have to read it.)

The thing about books is that they tend to serve as a snapshot of a moment in time. Everyone hails David Halberstam’s “The Breaks of the Game,” which I finally got around to reading last week on vacation and enjoyed. It paints a vivid picture of the NBA in the 1970s, back when I didn’t even know what an NBA was, but the NBA has changed massively since the book came out. For a more recent NBA book, check out Jack McCallum’s “Seven Seconds or Less,” about his season with the coaching staff of the Phoenix Suns, which I also really enjoyed.

For my money, the best basketball book I’ve ever read is John Feinstein’s “A Season on the Brink.” The book came out in 1989, and I think I got a copy for re-upping my subscription to Sports Illustrated. Feinstein spent the 1985-86 college basketball season shadowing Bobby Knight, who gave him complete access, even into the meetings with the coaching staff, etc. It was also a little jarring to read, at least for me, a book filled with curse words, something I wasn’t used to seeing in my local paper. It made such an impression on me that I still recall a lot of the stories and anecdotes. (The part where Keith Smart shows up to practice in a Puerto Rico t-shirt is priceless.)

One other book that I loved back in the day and had an effect on my knowledge of basketball was “Forty-Eight Minutes: A Night in the Life of the NBA,” which was co-written by two of the NBA’s greatest writers, Bob Ryan and Terry Pluto. (It’s on Amazon here, though it’s only available used.)

I bought this book at a used book store in Atlanta in the early ’90s, not long after it came out. I’m not sure why, other than I was a burgeoning hoops fan and it must have been pretty cheap, seeing as how I had no cash back then. But I still remember it well. The book is about one game in 1987 between the Celtics and Cavs, and it’s told through interviews with everyone involved with the game, from the players to the coaches, etc. There’s a lot of lead up into the game, but the game action itself is broken down play-by-play, with each possession getting its own diagram of the play and then interviews with all the guys involved in the play, explaining why they did whatever they did. That book taught me a lot about the strategy of basketball, about setting guys up on one play to take advantage of them on the next play.

Here’s where I’m looking for help: What’s your favorite basketball book/movie? What would you recommend to someone looking to learn more about the game.