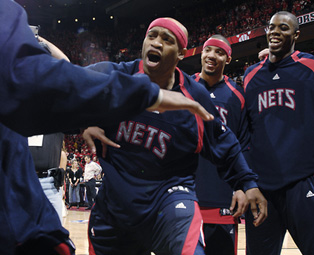 So, Day One of the Playoffs has passed, leaving me here late on a Saturday night in front of SportsCenter and baseball highlights. (Travis Hafner sure has put on a lot of weight in the last few years, hasn’t he?)

Wait, the only reason I’m here this late this weekend is because of the Playoffs. My goal during the Playoffs is to write at least one post a day, seven days a week. We’ve got a writer assigned to obsess over and break down each of the eight first round series, and all their posts will be showing up in the Playoffs 2007 category. My job is to watch all the series and play the role of omniscient observer. For the next few weeks I’ll do my best to watch as much NBA action as I can, and I’ll probably be doing more than a few late night posts.

Before we get to the Playoffs, two stories of note…

• The Kings canned Eric Musselman, just one season after they decided he was the man to come in and take the franchise to the next level. An NBA exec emailed me about this early Saturday and said Musselman “won’t ever learn that the world isn’t always working against him.” I’m no genius, but when you get fired from two different coaching gigs, maybe things are working against you.

• Bassy did it again. He was arrested and charged with felony gun possession, and according to people in Boston, he won’t be with the Celtics next year. Even though most people thought there was a rift between them, Stephon Marbury showed up for Bassy’s hearing (and wore a $9.99 sweatsuit). Assuming Bassy avoids jail time, I’m curious how all this plays out. Bassy’s still good enough to play in the NBA, and he’s still only 21 years old.

On to the Playoffs…

Didn’t see any of the Raptors/Nets because Sam and I were at Shea Stadium for Braves/Mets. The Braves actually left us tickets, so big ups to a classy organization. Someone at the game emailed me and said the atmosphere was unbelievable. sounds like Jason Kidd was, too. One thing I noticed on the highlights was a fastbreak where Kidd really did have his ankles shattered, crashing to the ground in a heap. I rewound the DVR and watched it a few times, but they never focused on it during the highlight shows. Please tell me they replayed that during the live broadcast. Please. Vince posted a stinker, but the Nets still won. The Raptors would probably Vince rather drop 50 but see the Nets lose.
As good as the Raptors have been lately, I picked this series to go seven games because these Nets are a good postseason team. Their halfcourt offense is diverse, and they push the tempo just enough to keep teams honest. And TJ Ford has got to do something to make life more difficult for Kidd.

Got home in time to watch the last few minutes of Heat/Bulls. This is gonna be Deng’s coming-out party, I think. Was surprised to see Ben Wallace flopping around like Dennis Rodman.

Watched a lot of Pistons/Magic, and I’m confident with my 4-0 Detroit prediction. The Magic looked so sloppy, particularly on offense, where they mostly stand around and then throw it into Dwight in the post and then stand around again. No wonder they’re so easy to plan against — there’s no imagination to worry about at all. And Jameer Nelson still looks like a 2-guard trying to play the point. Meanwhile, Detroit came out focused and ready and built up a big enough lead that they were able to coast to the win. Their starting five is really lethal, especially now that Webber’s figured out his teammates and where they like the ball — on one play Rip swung around a screen and Webber bounced him a pass that came in chin high, perfect for Rip to catch and shoot. That’s the kind of stuff that takes time to learn, and the Pistons are firing right now.

Didn’t see a second of Houston/Utah. Taping it tonight, though.

Lots of good stuff tomorrow. Cleveland warms it up against the Was Wizards (I’m going to call the Wizards that throughout the Playoffs since this current squad was the Wizards before being ravaged by injury) at 12:30. Think I’ll pass on that one. Then we get Lakers/Suns, Spurs/Nuggets and then Warriors/Mavs, three must-see games.