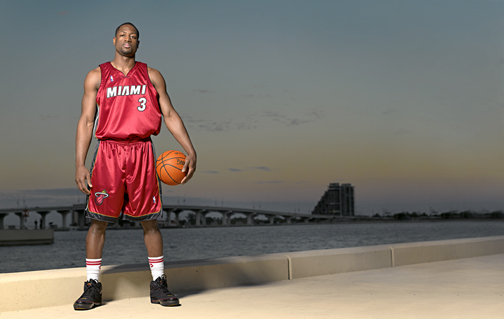 A couple of weeks ago I did a post about being in Miami for a Hawks/Heat game, where I ended up doing color commentary on the Hawks radio network for a night. That was a fortuitous event, and it gave me some material to write about.

What I did not mention was why I was actually in Miami: A cover shoot with Dwyane Wade for our new issue dropping this week, SLAM 127.

I was talking recently with an NBA player who, as NBA players often do, started lobbying me for a cover. I started explaining to my man that we have to pick and choose our cover subjects as much by marketability as we do by basketball ability. (And don’t think we don’t listen to your comments, either! I see you Eboy and Cheryl!) He asked who was on the next cover, and I told him Dwyane Wade. And he couldn’t argue with our choice at all.

After doing a little research, it was mildly surprising for me to realize that in all of our 126 previous issues, Dwyane’s only had two solo covers. His first was issue 101, which came after the Heat won the title in 2006, and his second was issue 87, the “Flashpoint” cover. So Dwyane was obviously overdue like the Netflix DVDs I’ve had at home the last three months.

We actually were talking about getting Flash on a cover last year when he blew out his shoulder, which put that on hold. Then he bounced back in the Olympics stronger than ever, and he’s been ridiculous this season. As of today he leads the NBA in points per game and has a Heat team most (OK, me) thought would struggle to win 30 games fighting for a four seed in the Playoffs.

So we made a call to Dwyane to gauge his interest in giving up an afternoon for a cover shoot, and our request was met with a Yes! that Marv Albert would’ve been proud of. Seems that despite the signature Converse kicks and T-Mobile ads and constant SportsCenter highlights, a lot of publishing people have forgotten about Wade — this is actually his first magazine cover for any magazine all season. We had a couple of concepts we floated, and Dwyane was down for whatever we came up with. But in the end we kept it simple. And I think it’s awesome.

The morning after that Hawks/Heat game, SLAM photog Atiba Jefferson, his crew and I met up under a gorgeous blue sky outside the American Airlines Arena, our bellies filled with cafe con leche and pastelitos de guayaba (well, mine was). We got the equipment loaded in and then sat and waited for the Heat to finish practice so we could use their court to set up our gear. When Coach Spoelstra finished up, and after a team meeting, a shower, a shave and a haircut, Dwyane finally emerged, raring to go. He got back into his uniform and we went to work. I checked my watch and realized I wasn’t going to make my flight back to New York that night. What I didn’t realize was that considering the amount of time we were about to get with Dwyane Wade, it would be totally worth it.

Just outside the practice court is a wall of photos that commemorates Miami’s 2006 Chip. Sitting there staring at the those photos, I was struck by the faces now long gone from South Beach: Shaq, GP, Toine, Kapono, Posey, Jason Williams, Zo. In fact, the only players still on the Heat from the title team are Wade, Udonis Haslem and Dorrell Wright (though he was inactive during the Finals). I asked Dwyane if he truly appreciated the magnitude of getting that ring at the time.

“Winning that title, it’s even better now,” Wade told me, three years removed. “I can’t say I didn’t appreciate it, because I appreciated the winning, having the opportunity to win a championship. But I didn’t know the significance of it. I was just happy to be a young guy with a championship, and knowing that a lot of people play this game and they never get there. So knowing I had one already and had a big part of bringing us one, it made me feel good, it made me feel whole. But I didn’t know the entire significance of it. Now I look back on it and think, Man, that was a helluva, helluva run that we had.”

“The thing now is I get to look at other teams that are getting to go through what we went through. So I look at a team like Boston and I think, It’s great while them guys are together, but there’s going to come a time soon that they’re not going to be together. And that’s when things change. But when you’re together, enjoy it, because it’s an unbelievable experience when you’ve got a veteran group of guys who are successful.”

I asked him winning that title was worth it considering how terrible the Heat have been the last few years while rebuilding. He paused for about a second before bursting out laughing. “Yes! Yeah! That moment? That moment of feeling like the best in the world? That champagne bath? It’s all worth it.”

We talked about a lot of stuff for the story, from the rebuilding of the Heat to the rebuilding of Dwyane Wade. Last summer, Dwyane was more serious than ever about working out and getting into shape, and this season we’re seeing the results.

“I feel great,” Wade said. “I feel as good as I’ve felt in a long, long time. And with the team that we have that’s kinda deep, they’re able to give me a lot of rest, so I’m more efficient when I’m on the court. So that’s been cause for a better year thus far.”

After a few hours in the gym, we were all ready to get outside. Why be in Miami if you’re going to be in a gym all day? We’d been talking about taking some photos out behind the Arena, as the Arena actually sits right on Biscayne Bay (you can even take your boat to a game). So our whole crew grabbed a couple of necessities (a few cameras and lights), took an elevator down and out of the Arena, walked across an underground parking lot, climbed through a hole in a fence and popped out right next to Biscayne Bay. A couple of kids were fishing about 200 yards down the shore, and when we emerged they all started yelling and screaming, which was great: Imagine if you were a little kid out playing next to the arena of your favorite NBA team, when all of a sudden the best player on your favorite team showed up out of nowhere wearing his full uniform.

The sun was setting, so we hurriedly snapped a few pictures and called it a day just as the sun dropped behind downtown Miami to our West. And out of all that, we got a great cover and cover story. As we were finishing up this issue, I realized what a great issue it is, with a terrific variety of stories, from Wade to OJ Mayo, from Pitt to Wake Forest, from Michael Gilchrist to David Lee…there’s even a story about the 1989 NCAA Title Game written by Farmer Jones (Rumeal Robinson, anyone?)

The issue should be on newsstands here in NYC tomorrow and on newsstands across the country by next week. You’ve seen some of the images Atiba snapped throughout this post, and now here’s the cover. Be careful, it’s hotttt…