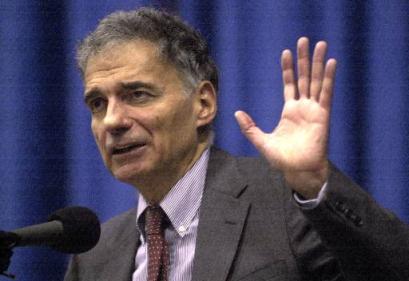 So here’s what I can’t figure out: How are the Spurs going to win the Western Conference? The other night on TNT, The Chuckster was saying he’s still picking the Spurs to make it out of the West. And as much as I respect the Spurs and what they do, I just can’t see this happening. They don’t have the right kind of team to run with Phoenix for seven games, and I’m not sure they have the depth to get through Dallas in seven. The West has to be Dallas or Phoenix, doesn’t it? Doesn’t it?

The other day someone noted that they didn’t like that long post I wrote because it would be nice to get links and NBA content. Point taken, but that post was the exception and not the rule. I’ve been trying to figure out the best way to keep The Links going forward. As I’ve said before, The Links as they used to be are dead and will probably never return in a daily format like that.

What I’m going to try to do is still write something daily, but mix it up a bit more. I may do a load of links once or twice a week, but the other days I’m going to try and do more column-type stuff. I don’t know how this will all shake out, but that’s what I’m thinking now.

In my new role here, I find myself involved in a lot more different things than I’ve ever done before, like working on cover concepts and doing behind-the-scenes stuff (got something cooking right now for this summer which, if it pans out, will be the coolest thing we’ve ever done). For instance, I spent almost all of the day yesterday consumed with making a cover photo shoot/interview happen. There’s a lot of politricks and massaging of egos involved. Luckily, I’m good at dealing with egos because I’ve been married for four years.

Anyway, that’s what I’m thinking. Your input is welcome.

Some stuff worth linking to today…

• Quotes of the Day:
“Red Bull.” — Francisco Elson, when asked where he found the energy to score a season-high 14 points against the Pacers.

“Basketball is 99 percent headcase anyway. All of us are headcases, you know, if you get in this business.” — Jerry Sloan.

“Each one of us is motivated differently. I’m motivated right now for the playoffs and that’s my goal, personally. Sometimes you find yourself only controlling yourself. So if I lead, hopefully they’ll follow. Half the time they will.” — KG, on the T-Wolves.

• Earlier today, Ron Artest pleaded not guilty to misdemeanor charges following that contretemps with his wife a few weeks ago. He’s been ordered to stay at least 100 feet from his wife and children. Sad stuff all the way around.

• Guess who the Jazz have thawed out to play shot doctor for Andrei Kirilenko: Jeff Hornacek!

• Will Kobe go for 50 tonight against Memphis?

• Since I mentioned the Hawks making a playoff push they’ve gone back to sputtering. Last night they lost to the Heat who were without Shaq most of the game, and without Zo, Wade and Kapono. “Those guys are old, but they know what they’re doing,” Marvin Williams said in the AJC of the Heat, the third-oldest team in the league. “I don’t know of a better way to put it. But they’ve all been around and they’ve all been on winning teams, and they just know what they’re doing.”

• Failed presidential candidate Ralph Nader has released an open letter to LeBron James asking him to do something about Nike and their alleged use of sweatshop labor. Nader mentions how other athletes have taken stands against the war, citing Steve Nash and SLAMonline columnist Etan Thomas. Nader does not mention that Steve Nash also wears Nikes and has not felt it necessary to get into this debate.

• Jamaal Tinsley got himself tossed last night after throwing a ball into the stands. Reminds me of one of my favorite stories ever:

Years ago I was covering a Hawks game, back before Philips Arena was built when the Hawks were playing home games at the cavernous Georgia Dome. One night a call went against the mild-mannered Alan Henderson, and for some reason Hendu snapped. He grabbed the ball and turned toward a huge section of movable bleachers that were set up next to the court, then flung the ball way up in the air and over the top of the bleachers. As a technical foul was whistled against Hendu, the ball disappeared behind the bleachers. We later heard that the ball came down and, of all the 20,000 people in that arena, the ball popped Dikembe Mutombo’s teenage daughter in the head on the fly (she wasn’t hurt).

• Love that the BETcats went to a four-guard lineup to beat Boston, who led by 18 in the third. Sounds like Delonte West and Brevin Knight were having a little back-and-forth on the floor, too. After the game, Doc Rivers had to announce that the Celts weren’t trying to tank the game.

• Note at the end here that the Pistons have installed a workout room that simulates 9,000 feet of altitude. Great, now Gilbert’s going to have to get his adjusted to simulate something like 15,000 feet.