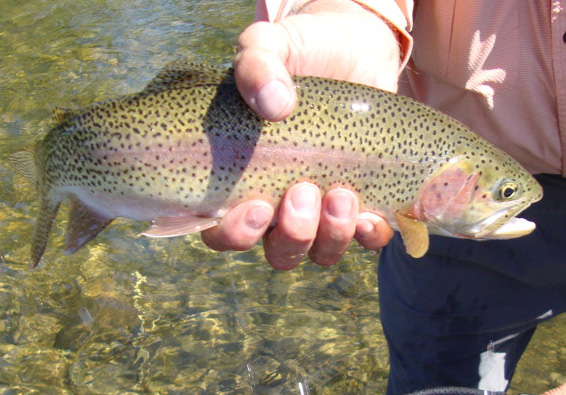 Last year I explained how Wifey and I always try to spend at least a few days each summer off the grid, away from phones and emails and the non-stop news cycle. Last summer we went to Africa. This summer we stayed closer to home and went out West, to Montana.

For me, visiting Montana fulfilled two goals. First, I’m trying to get to all fifty States. I’ve now been to 46. (I’m missing Alaska, Nebraska, and North/South Dakota.) Second, it allowed me to see the land of Norman MacLean. You’re probably at least familiar with the movie A River Runs Through It, and it’s a beautiful movie, well worth seeing. But what I really love, and have loved ever since I read it decades ago, is the novella upon which the movie is based. It’s one of the works which got me interested in writing, and it’s a gold standard I chase after every time I sit at the keyboard. So I’ve always wanted to see Montana for myself, and when Wifey got a great deal at a wonderful place out there, we figured it was time. So I unplugged and checked out and spent some time riding horses,

hiking mountains, and fly-fishing in the Bitterroot, like my man Norman MacLean.

(And I caught that 17-inch cutbow at left. Funny thing was I caught it about 30 minutes after we set out, before our guide had really even had time to explain what we were supposed to be doing. I just dropped a fly in, was letting it float alongside the raft, and then BANG! So I reeled it in. Then after I learned the right way to do it, I didn’t catch anything else anywhere near the size of that one the rest of the day.)

For me, the big surprise on the trip was discovering Yellowstone National Park. I didn’t know much about it, other than it was, well, a huge park. But after five days in Western Montana, Wifey and I figured we were so close to Yellowstone, we might as well check it out. So we drove down and got there Friday afternoon just in time to see Old Faithful blow its top, which was cool but relatively one-note. (It’s a geyser. It sprays water into the air.) Woke up at the crack of dawn on Saturday morning and started exploring the park, and it was really a special. There were areas that were flat and almost prehistoric, with salt-crusted landscapes and steam rising from underground, like we were in the Land of the Lost. There were lush waterfalls, and there were soaring rock formations in arid desert-like environments. And then just minutes away there were these huge tree-covered mountains. At one point in the afternoon we were driving along and I saw a sign alongside the road advertising something called “MUD VOLCANO.” I immediately pumped the brakes and wheeled into the small parking area. Wifey asked if the Mud Volcano was some famous site or something. I told her I had no idea, but I wasn’t going to pass up the opportunity to see anything called Mud Volcano.

And then there were the animals. Everywhere you looked there were wild animals roaming around: bison, deer, elk, coyotes, grizzly bears, etc. Early on Saturday I was driving around the Southern part of the park and rounded a bend, when I saw a bison slowly walking down a hill toward the two-lane road we were traveling. There were no other cars around, so I pulled off to the side of the road about 25 yards away. The bison ambled down the grassy slope and up onto the pavement, then started walking slowly down the center of the street as though without a care.

A car approached from behind me, driven by an older man. I think he had a smug look on his face. (I can’t confirm that, but I like to imagine he had a smug look.) Instead of getting out of the way, this dude swerved a bit to the right and tried to accelerate past the bison. Without hesitating, the bison dropped his head and tried to ram into the side of the car. The bison was actually bigger than the car, so it kind of would have been awesome if the bison had connected. But he whiffed, and the car sped off and the bison just kept on walking up the road.

Having been around all the wild animals in Africa, I figured the same rules would apply. So I rolled down my window, stayed in the car, shut my mouth, pulled out my video camera and filmed this:

Yellowstone was the closest sensation I can imagine to experiencing the wildlife of Africa. And instead flying for two days to get there, it was only about 4 hours from NYC by plane and a $25 entrance fee (which gets you in for a week). If you’re ever in the area, don’t hesitate to see it.

• We’re in the final stretch of finishing our KICKS issue here, so things are sort of crazy for us the first half of this week. But here’s two things to fill your day:

First, another great thing about going on vacation was getting to catch up on my reading. I was a few issues behind on the New Yorker, and I’d been carrying this one issue around in my bag for three weeks. Finally I cracked into it and started reading this story, which might be the best magazine story I’ve read all year. I don’t even really care about the subject matter, but it’s very well-written, and after the first third of the article, the story reaches what would be a logical ending point for most magazine articles. And then it makes a dramatic U-turn and the story becomes about something completely different.

It’s a long read, but it’s completely worth it.

Also, my main man Sekou Smith asked me to sit in with him yesterday and guest co-host on the NBA.com Hang Time Podcast. We had the great Steve Smith on to talk about CP3 and the possibility of Shaq coming to the Hawks, and then Cleveland.com’s Branson Wright to talk about the fallout in Cleveland from “The Decision.” First, though, Sekou and I talked about how white I am, which is always fun.

You can listen here.

Or download the entire file here, or cop it on iTunes here.