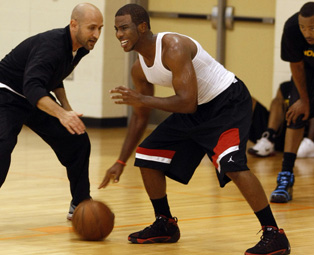 One part of my gig here at SLAM that goes wildly under-reported is how much time I spend talking to people. Not for The Links, maybe not even necessarily for anything you’ll ever read. But still. I’m pretty sure I’ve mentioned this before, but I always compare my job to being the guy in the circus who spins the plates. At any given time, I’ve got about ten plates spinning, and I’ve got to keep them all spinning, and if I forget about one plate, even momentarily, there’s a good chance it could fall to the floor and shatter into a million little pieces. So I stay working the email and the texting and phones.

(Actually, I just got a random phone call with a story idea that was, quite literally, unbelievable. So unbelievable that I think I have to do it. Gotta keep it under wraps for now, but I’m sure you’re going read much more about that this fall.)

I tried to get that SLAM Podcast series going back in the spring, but it took way more time than I had available to plan everything and chase guys down. But I really liked the immediacy of the concept — just taking audio and tossing it up on the site is much easier than writing a 1,500 word essay about the relevancy of Allen Iverson. So I’m hoping I can make what I’m about to run a semi-regular series. Shorter than a podcast, but hopefully just as interesting.

Earlier today, I was Talking With…Idan Ravin. The casual NBA fan might not know who he is, but guys like LeBron, Melo, Chris Paul…they know him all too well. Idan is basically a personal basketball trainer, and he’s known around NBA circles as The Hoops Whisperer. Idan spends his summers bouncing around the world, helping the best basketball players in the world get even better.

I caught up with Idan today while he’s down in Winston-Salem, NC, working with Chris Paul and Morris Peterson (the photo on the right is actually from yesterday’s workout). We talked about how Idan got into the business, how he keeps his client roster of NBA All-Stars in tip-top shape, and what kind of advice he’d give the basketball player who is still looking to improve their game…