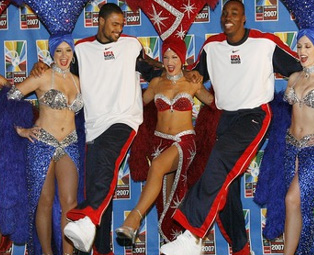 First of all, welcome to 2002, back when SLAMonline was barely chugging along from day to day. Remember the broken images on the main page, the complete lack of content other than The Links and an almost total lack of interactivity? That’s pretty much what we’ve had the last 24 hours around here. I am unable to explain all the technical mumbo-jumbo behind what’s going on, and I have no explanation for why the home page has some photos missing and instead just says “Array,” but that’s where we are right now. There was some talk from our tech guru Jonathan Andersen of switching servers yesterday, so I’m guessing that’s the culprit here. Either that or Horacio Llamas.

Either way, things are slowly returning to life. Comments appear to be back, which means Ryan, Russ and Whit Eboy can resume their lives and stop nervously every five minutes checking for the return of commenting and the off chance that one of the three would pull into the lead in our all-time “most comments” statistic.

Since I went all 40 minutes last night, I thought I’d do it again tonight for the US/Puerto Rico match. And who knows, maybe a game will break out.

• The game everyone will remember between these two countries was in 2004, back when PR upset the US as Larry Brown fiddled on the sidelines at the Olympics in Athens. In that game, Puerto Rico shot 56 percent from the field and drilled 50 percent from three-point land. Also, Richard Jefferson missed 16 shots in that game. I remembered all of those figures instantly off the top of my head. OK, not really. Looked that stuff up.

• I do, however, recall the brawl between China and Puerto Rico a few years ago. Have fun with those.

• Russ just called and said he was angry at himself for forgetting that the US/Mexico game was on last night. “What kind of a Llamas fan am I?” he asked aloud. I don’t know Russ, I just don’t know.

• I meant to mention that ended up at a blackjack table at the Palms one night with two of the Puerto Rican players, who both celebrated along with me when I split my hand of two aces, was dealt two more aces, split both of those, and then won all four hands.

• Looks like another small crowd. If I was out there in Vegas I’d probably be gambling, too.

• Same starting five as all the other games, although Kidd is back in for Billups, who got his first start last night.

• Finally, a team comes out in a zone against the US. Everyone knows that’s the best way to slow down the US, but every team comes out in man-to-man, at least initially, as if to prove they’ve got the guts or something.

• Peter John Ramos with a hook over Dwight Howard. I think Criss Angel made that happen.

• An NBA exec just emailed me and asked if Bill Walton and John Saunders are actually in Vegas calling the games. I don’t know the answer, but it does kind of seem like ESPN’s trying to trick us like they did last year when Team USA was in Japan and they had Fran Fraschilla and (I think) Jim Durham in Bristol calling the games from a broom closet. Come to think of it, they never show Walton or Saunders actually there at the games. Hmm…

• Walton says that sports is the fifth-largest part of the US economy. He then notes that Puerto Rico is “the smallest of the lesser Antilles.” Walton is back to form tonight, kids. And he just said something in Spanish as I was typing that.

• John Saunders just gave a plug for Chris “The Machine” Sheridan. He must be trying to stay on Sheridan’s good side. I know I am.

• Arroyo throws a little elbow at Kidd, who calmly walks away.

• Ramos looks like Rio Ferdinand with a pituitary problem.

• Tomorrow night is USA versus Uruguay. Batista, rise up!

• Carmelo Lee is balling for Puerto Rico. Ayuso scores on a drive and makes it 16-13. Then Kobe hits a short jumper to make it a 4 point lead again.

• JJ Barea is in the game now for PR. Coach K shuttles in the backups. Amare gets a rebound and pegs it off the back of a Puerto Rican player’s leg and out of bounds.

• 24-15 after one. That quarter happened fast. PR’s done a great job of keeping the US from getting out and running too much.

• We come back from commercial just in time to see Amare dunk on Ramos, basically a recreation of what happened whenever Phoenix played Washington the last few seasons.

• Amare for three! He nailed one from deep. Yes, it’s the college line, but I think it’s the longest shot I’ve ever seen him make.

• Team USA and Puerto Rico are a combined 3-for-19 from three.

• Carmelo gets an open dunk, flexes the rim to show off and falls right on his ass. Hilarious. Mardy Collins is going to post that on YouTube.

• Amare with a Moses Malone play — where he tips a missed shot off the glass to himself over and over, padding his rebounding totals — and then the basket. He’s really playing hard tonight, with 7 points this quarter.

• There’s been a ton of ads for the 2010 World Championships in Turkey. I’m going to start lobbying to get that assignment right now. I don’t know much about the country, but it would be awesome if there was a town in Turkey called Jive.

• 9-2 run for the US to start the second quarter, so it’s 33-17 now. Then Melo gets a three. Then LeBron gets a three. All of a sudden the US is up 22. Bill Walton is now giving a brief biography of Vinny Del Negro. Really.

• I think Larry Ayuso has a tattoo of Jesus on his right arm. That thing is a little bit too real.

• OK, Bill Walton is amazing. Now he’s giving a verbal tour of the island of Puerto Rico, talking about various cities and towns while sprinkling in geographical facts. I can totally see him reading this stuff straight from an Encyclopedia Britannica. I’d love to take a long trip to a foreign country with Walton, just to hear him talk about the places we would visit.

• I think Larry Ayuso’s tattoo is watching me.

• Bill Walton should run for President. Those debates would be incredible — the passion, the desire, the glory.

• Years from now, we may remember this as the Summer of Walton. The big man is owning the Tournament of the Americas.

• The US holds for the last shot and Kobe and Chandler can’t get a ball to drop. After one half, the score is 59-27. The US is winning, by the way. During halftime, ESPN promises to bring us a feature on Kobe Bryant called “Bears Come Up To This Window?” I find this tasteless and will not watch it.

• I accidentally watched it. The message is this: Kobe really wants a gold medal. He says it about 400 times in the four-minute piece. Got it.

• Kobe gets tangled up with Larry Ayuso and they beef for a second, then Kobe starts telling him how much he wants a gold medal and they both calm down.

• Walton is talking about the Spanish-American War, the potential statehood of Puerto Rico and he calls San Juan “one of the most…eclectic cities in the world.” I hope someone from the Travel Channel is watching this.

• LeBron misses a runner and PJ Ramos tips it into the basket for the US. I’m pretty sure he doesn’t know which basket he’s supposed to be shooting on.

• 64-35, USA. Every time I see Ramos, I think of Gilbert Arenas saying that Ramos’s head is so big that the woman who braids his hair must get carpal tunnel syndrome.

• Kobe and Ayuso are getting chippy. They get iso’d, Kobe steals it and throws ahead to LeBron for a dunk.

• LeBron “seems to be sailing off the cliffs of Fajardo.” Guess who said that?

• Something happened in the game, must have been a technical foul, but it happened off camera and Walton and Saunders have no idea what’s going on. So they’re obviously in Bristol. ESPN makes billions of dollars, and they can’t afford to put a couple of announcers up in Vegas for a week so they can accurately describe the action to us, the viewers? Completely unacceptable and totally ridiculous on ESPN’s part.

• Ramos just scored on the US basket again. This man is a real two-way threat.

• Tayshaun Prince just got called for a goaltend. First time I’ve even noticed him tonight.

• Did Amare get some new tattoos? His right arm and shoulder is almost completely covered.

• I just noticed that there’s still 4 minutes to go in the third quarter. Ugh. This is gonna be a long one.

• Ramos just swatted Prince, who’s playing on a sprained ankle. Ramos then outmaneuvers Amare in the post for a dunk.

• Sorry, zoned out there for a second. Arroyo just fouled out with 1:30 to go in the third. He goes to the bench, and I think I saw one of the other guys on the Puerto Rico bench sending a text message.

• Walton says he’s fascinated by the developing “situation in Milwaukee” involving Yi Jianlian. Luckily, the third quarter ends before he can go much further. 88-56.

• Look, this is boring. I’m changing the channel but will flip back and forth. Let’s see what else is on TV…

• William Baldwin is on Jimmy Kimmel tonight. That can’t be good, for Kimmel or for viewers. Bill Hader from “Saturday Night Live” and “Superbad” is on Leno. He reminds me of Adam Morrison, but funnier. (At least, intentionally funnier.) They show a clip from after McLovin gets punched in the face and the cops come to interview the clerk at the liquor store. If you haven’t seen “Superbad” yet, you really should.

• “Dog The Bounty Hunter” is just starting on A&E. I don’t watch this show regularly, but I’ve seen a lot of episodes late at night. I can’t figure out how they make enough money to support such a large staff. They’ve got about 20 people working at the bail bonds place and they all drive huge SUVs, but they only seem to catch about one person every four or five days. How much are these rewards they’re getting?

• Just when I turn it back to the game, Walton says, “For every hundred Americans, there are 90 guns in this country. Staggering.” Makes me angry I missed whatever they were talking about. It’s 101-69 with 4:56 left. Changing the channel again…

• I see something called “Dirty Work” on The Movie Channel and get excited, thinking it’s the Artie Lange/Norm MacDonald classic. But it’s not.

• For some reason, ESPN Classic is showing a 2003 Arkansas/Kentucky football game, with my favorite current NFL player, Jared Lorenzen (a.k.a. J-Load a.k.a. The Hefty Lefty) at QB for Kentucky. No idea why this is on but I’m really excited about it. I’m not going to read why this game is on, but instead I think I’ll sit back and watch. There’s some show on Discovery Health channel called “I Am My Own Twin.” I’m afraid to even check this out.

• US is up 107-74 with 2:35 left. And I’m checking out. I’m heading out of the country tomorrow, and Russ has promised to take over the game notes at least once later this week. Hopefully Russ can find more to write about.

• Whoa, these twins are freaky.