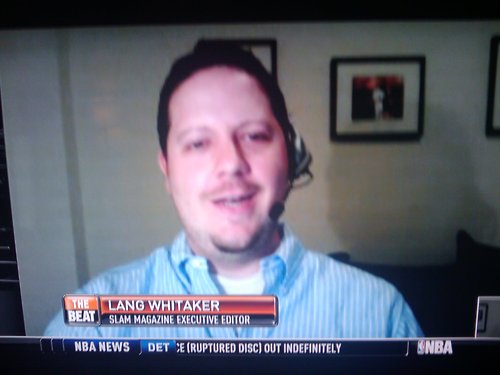 So my initial foray into a weekly TV gig has been endlessly interesting, especially from the perspective of someone who’s worked at a monthly magazine for the last 8 years. Here at SLAM, we have an idea or a concept, we get a few weeks or months to work on it and execute it. On TV, we have hours. For instance, “The Beat” airs live at 6:00 p.m. every Tuesday night. We have a conference call to figure out the show at 2:00 p.m. on Monday. This Monday, we all agreed that the Iverson story was the big news we should probably lead with. Then early Tuesday morning, Kareem Abdul Jabbar announced his battle with leukemia, which was obviously the big story of the day. So that became the major story on “The Beat.” Because our producers had already booked Brandon Jennings and Steve Kerr as guests, talking about Iverson got bumped completely from the show. I was supposed to talk about Joe Johnson at the end of the show, but around noon I switched to talking about Iverson, so we’d at least have him in the show, and I wrote the little AI spiel which I gave at the end literally as the show was happening.

I’m still not very good at TV, but I’m improving — gotta be more energetic — and I’m surrounded by a lot of pros, both on camera and off, who are all a lot of fun to be working with. My dad called me after the show last night to say he enjoyed it, and he accused me of becoming a TV star. I pointed out real TV stars don’t have to do laundry and walk the dog as soon as their TV show ends.

(Oh, and I’m doing color commentary on the Atlanta radio broadcast of the Hawks/Knicks game tonight. If you’re in The ATL, you can listen in on 790 AM. If you’re not in The A, you can listen on hawks.com. And then I get to rest. Anyone played that new Modern Warfare? Haven’t had 10 minutes yet. Yet. I might burn out my flat screen this weekend, though.)

Also, right here I’m writing a totally pointless paragraph to fill up space and make sure the embedded videos that follow get bumped down below the “related stories” box, which appears to have been designed to keep me from writing short posts that have a video in them. Is that enough? I think that’s enough.

Anyway, again, here are some clips from last night’s episode of “The Beat.” Hope you enjoy…