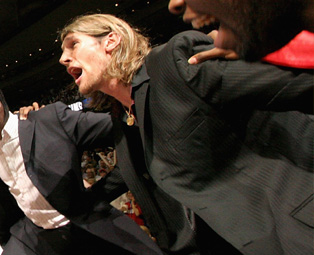 Three years ago, the NBA instituted a dress code. Tired of players rocking jeans and throwbacks jerseys to games, the David Stern Robot had seen enough. According to the

Going by the letter of the law, Detroit Pistons reserve forward Walter Herrmann is technically within his rights to dress the way he’s been dressing throughout the postseason. Though we was active for a few games, most of the postseason has found

Herrmann inactive and parked on the bench, cheering his team on. And wearing some of the stangest suits in recent NBA history.

It’s not enough that Herrmann looks like Fabio and apparently cultivates that look; his flowing blond locks are inarguably a thing of majesty, befitting of an American Gladiator. No, Herrmann is also trying to distingish himself by wearing a succession of open-necked suits and shirts straight out of the ’70s, similar to a character in “Grand Theft Auto: Vice City.”

While his strange style is constantly on parade during telecasts (every time the cameras point to the Detroit bench, there he is, in full plumage), finding photos of Herrmann all decked out is not easy. I suppose the NBA photographers were told not to focus on the guys sitting on the bench and instead shoot the action. Hey, our loss.

Instead, the images accompanying this post are all I could find, despite spending the better part of an hour today combing through Getty Images as meticulously as Herrmann must comb his hair. Like Kobe coming off a screen, we don’t get a lot of clear looks. These pictures are the best I could do, a collection of fleeting glimpses of Herrmann’s majesty.

I suppose the possibility exists that Herrmann is just fashion-forward and leaving the rest of us behind, or that perhaps we are witnessing some sort of cultural disconnect that just doesn’t make sense to us wacky Americans (although I haven’t seen Herrmann’s countrymen Manu Ginobili or Andres Nocioni dressing like this). Whatever the reasoning, it is obvious that Walter Herrmann is his own man, unafraid to flout convention and instead style and profile.