Links: The Garden Of Dreams 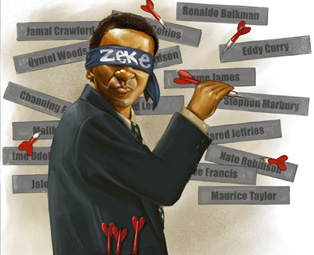 I’ve lived in New York City for seven years now, and in that time I’ve probably been to nearly 150 Knicks games at Madison Square Garden as a member of the press. In that time, the Knicks have had three different PR directors and a handful of different people working in the PR department.

While some things have changed, there have been a few constants, such as the lackluster food made available and my main man Al, the greatest usher in the Garden, watching over the press box in section 64.

I bring this up today because there’s a pretty damning story in the NY Observer about the state of media relations between the Knicks and the local beat writers. (Read the linked story first, then come back here, because otherwise this stuff won’t make any sense.)

While I’m not a beat writer and I don’t travel with the team on the road, I have been around long enough to have been witness to a lot of what the story details.

Yes, the TV reception can be fuzzy sometime.

Yes, the food is sub-par and it costs $8, although nobody is forced to buy it, and the $8 does allegedly go to charity.

The thing is, it is what it is — the Knicks are who we thought they were. No, it’s not the best press room in the League, but it’s not the worst either. (They actually renovated the press room over the offseason and made it nicer, although the coat room is completely devoid of coat hangers, which is awesome.) The Knicks media relations staff might be aggressively unhelpful to some of the beat writers, as my main man Frank “Italian Ice” Isola notes, though I’ve never had a problem with them while working on several stories, like that Nate Robinson Streetball cover we did a few months back.

Of course, there’s a huge difference between myself and the beat writers. Mainly that I don’t write about the Knicks seven days a week, and that I’m not around every day writing about how bad (or good) the team is. I’ve written plenty of negative things about the Knicks — my personal favorite was the drawing on the left we commissioned for my NBA preview last season — but I don’t feel anyone’s held that against me. (Although that could explain why my cable service at home has been really spotty the last few weeks.)

I’m guessing that the Observer article is partly spurred by a lack of faith. Some of the beat writers think that not only do the Knicks resent them, but that the Knicks are actively out to get them. And some people with the Knicks probably feel exactly the same way.

But mostly, I think what we’re witnessing is a meltdown. The Knicks media relations people aren’t the only ones pissed off that they’re around this mess — the players and the beat writers are, too. Right now, everyone hates the situation they’re in.

Which is something even James Dolan and the beat writers can probably agree on.

• Lastly, I wrote a new column for Hawks.com today. You might be able to find it somewhere on the home page here, if your eyes are good enough.