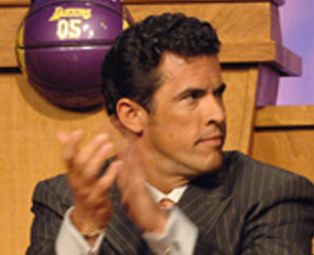 Back in the summer of 2005, the Milwaukee Bucks hit the jackpot and won the NBA Draft lottery. Bucks GM Larry Harris was so excited that he began shaking, literally. The Bucks drafted Andrew Bogut and hired Terry Stotts as head coach, Harris allowed cameras into his office to show the Bucks diligently working through the Draft process and preparing for the future, and many observers around the NBA declared the Bucks a team on the rise.

Over the last two seasons, the Bucks have gone 68-96. Some of their futility can certainly be attributed to injuries, but what if it’s more than that? What if it’s just poor decision-making from the front office?

• Signed Bobby Simmons to a five-year, $47 million deal. Over the last two seasons, Simmons has played in just 75 games due to injuries.

• Traded Desmond Mason for Jamaal Magloire after reading about Magloire’s availability on the internet.

• Essentially traded Magloire for Steve Blake. Upon acquiring Blake, Harris said, “In Steve Blake, we added a talented point guard who had one of the best assist-to-turnover ratios in the league last season.”

• Drafted Chinese big man Yi Jianlian despite not having seen him play in person and despite warnings from Jianlian’s agents that he would not play in Milwaukee. Jianlian is still refusing to play for the Bucks.

• Signed Mo Williams to a contract six-year deal worth about $9 million per season.

The Bucks enter this season with Michael Redd as their go-to guy, Mo Williams at the point, and after that a lot of questions remaining. Will Bogut ever break out? Can Villanueva and Simmons stay healthy? How will Larry Krystowiak work out as coach? And what’s the deal with Yi Jianlian?

I hope Jianlian doesn’t play this year, re-enters the Draft next season and is drafted by Milwaukee again. That would be fitting. Also, the few Bucks games I watched last season, I thought Ersan Ilyasova was a pretty good young forward. Which is too bad, because he just left the Bucks to go play in Europe.

Bucks owner Herb Kohl recently said that this is basically a put-up or shut-up year for Harris, which must have been nice for Bucks fans to hear. As a Hawks fan, at least I know my team is at the bottom and rebuilding. The Bucks, however, are in that horrible middle, where they aren’t good enough to win a title (or even their Division) but at the same time have too much money invested in contracts to be in rebuilding mode.

Larry Harris must be a capable employee — he’s worked for the Bucks for a minute now, starting as their video coordinator and working his way up to GM. And the Bucks are in good shape salary-wise, currently 29th out of 30 teams with about $40 million committed next season. (Of course, they also only have 8 players under contract at the moment.)

But at some point Harris has to create some winning teams, doesn’t he? Put all those moves together and there are some curious conclusions. For instance, Harris turned Desmond Mason into Jamaal Magloire, Magloire into Steve Blake, Blake into Earl Boykins, and Boykins into nothing.

OK then, never mind — the Bucks are going all the way!