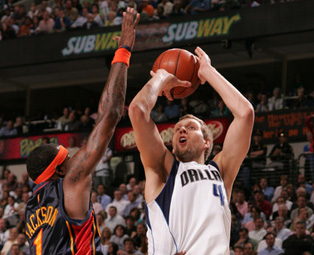 Welcome to the Playoffs, Dirk Nowitzki.

For all you who’ve been hating, who’ve been calling Dirk overrated, he had a little something for you last night. Thirty points, 12 boards, a huge blocked shot down the stretch and a couple of cold-blooded three-pointers to bring Dallas from behind from 9 back with 3 minutes to go to win the biggest game of the Mavs’ season (and just a great all-around game).

It seemed like the Mavs, for the first time this series, realized the importance of the game. The Mavs found some fire, fought back whenever Golden State hit them with a roundhouse punch. Then there at the end, Dirk picked them up and carried them over the finish line, as the Mavs ended the game on a 15-0 run. Really impressive night from Dirk. An MVP night.

I watched the entire G-State/Dallas game and the entire Toronto/New Jersey game. A big que pasa to Jose Calderon, who stepped in after TJ Ford went down and led the Raptors to the victory. The Nets made a late charge, but there at the end when they needed a big shot, what happened? Vince passed the ball. To Boki Nachbar. Game, Toronto.

I didn’t take notes during Toronto/Jersey, and I don’t regret that decision. Kind of a weird game, without a lot of flow to it. Toronto went smaller and started MoPete, built a huge lead and the hung on for dear life. (And if you Toronto folk didn’t have enough reason to be angry with Vince Carter, you got even more when he rolled over TJ Ford and sent him to the hospital. It was accidental, yes, but it was also ironic that it happened to be Vince involved.)

• My D-Sidekick got the MVP tonight — I must’ve received/sent at least 100 emails and text messages. And of those messages, probably ten percent were about TNT sideline reporter Stephanie Ready. Who is she? Where is she from? Can’t she be on camera more often?

Well, Wikipedia has a few answers. Don’t worry, I’ll find out more about her after I book her to come speak at the SLAM offices.

• Dick Stockton noted early that Baron had a tough season because he “played on a surgical knee.” Yeah, that must be tough to play on.

• Early on, Dallas established a brilliant strategy: Don’t miss any shots. I don’t know the percentages, but they were red hot. Even after a cold spell in the second half they finished the game shooting 51 percent from the floor (and 10-of-21 on threes).

• I’m convinced that basketball coaches, for some reason, can never keep track of how many fouls players have. Every coach I’ve ever had had to have an assistant sit there and keep track of how many guys were in foul trouble, and the same holds true in the NBA. Watch Avery Johnson, though, and you can see him constantly scoreboard watching, trying to keep count for himself. What was coaching like before scoreboards kept track of this stuff for you? Maybe that was the secret to being a legendary coach before there were huge scoreboards. I wonder if Red Auerbach and John Wooden were secretly just really good at keeping track of fouls?

• My favorite play that Dallas runs — and they seem to run it once in every game — is the high pick with Devin Harris and whoever the center is that ends up with an alley-oop to Stackhouse. It’s an interesting play, because there’s no pick or screen or anything for Stack. He just stands in the corner, waits for his defender to turn his head and then sprints past him and to the rim. It always seems to work, at least once each game.

• I loved that Warriors montage TNT showed and set to that song by “30 Seconds To Mars” that I secretly enjoy but will never publicly admit to liking.

• At one point in the second quarter I was innocently watching and Reggie Miller said that the Warriors were “going to throw the whole kitchen book at Dirk.” I immediately rewound the DVR to make sure I heard that correctly. I think he meant to say they were going to “throw the book” at Dirk, which would mean they’d be charging him with every crime they could think of and obviously doesn’t make any sense. But for whatever reason, Reggie tried to change course and use the old “kitchen sink” saying, and he ended up combining the two.

It was such a great verbal blooper that I immediately sent an email to a few SLAM staffer to alert them. (Then at halftime, Kenny Smith actually had noticed it as well and he played the audio of it.)

Earlier in the game, Reggie had said that Dirk Nowitzki was “probably the MVP of the year this year.”

On Thursday night, as I documented here, Reggie said the officials have been under more scrutiny “in lieu of Joey Crawford.”

Also on Thursday night, as Ryan documented here, Reggie said that he felt that Monta Ellis should “garnish” the Most Improved Player award. (Now that Ellis was actually garnered the award, still no word on whether or not he’s garnished the trophy yet.)

I can say this about Reggie: He kept me on my toes all night. Every time I heard him start speaking, I grabbed my Sidekick in case I needed to write something down quickly.

• I was talking to a friend yesterday and we started chatting about all the crazy things it was believable that Stephen Jackson might do someday during a game. You know, like if you really pushed him to his limits.

So, I made a little list tonight of things that Stephen Jackson could snap and try to do which not shock me to hear about:

— Re-enact the opening of The Last Boy Scout.
— Turn and suddenly bite a referee’s face off like Hannibal Lecter.
— Grab a folding chair from the front row and smash Dirk Nowitzki across the back with it.
— Shove a whistle down a referee’s throat.
— Pick up a mop from a ballboy and snap the stick across his knee.
— Use a towel to sneak up and pop Mark Cuban in the butt.
— Throw one of those giant Gatorade coolers onto the court.
— Set the scorers table on fire.
— Run up into the stands and attack a fan, helping to spark the largest brawl in NBA history. Oh, wait…

• Do you think Paul Shirley watches Austin Croshere play and yells at his TV, “Why him, God? Why!!!!!”

• Dick Stockton said it “would be embarrassing” if the Mavs lost to the eight-seed. You think?

• Every once in a while I’d catch a glimpse of Popeye Jones sitting over behind Avery Johnson and it would scare the hell out of me.

• There’s no better feeling than a game going to halftime and thinking you need to get up and grab a drink, maybe run to the bathroom, and then you remember that you’re about to get 10 solid minutes of Charles Barkley.

• Baron pulled a weak move flopping in front of the bench when he got tangled up with Jason Terry. I did like that Reggie Miller immediately called him out for acting — if anyone should know, right? Next game Baron has to wear a red Ronaldo no. 7 jersey. Ken Mauer should have shown him a red card.

• Just looking at Matt Barnes, he looks like he’s lost a lot of bets in his life.

• My favorite Southwest Airlines commercial is the one where Hawks’ beat writer Sekou Smith is in his garage pumping up the basketball, then he goes outside and throws it off the basket and the ball explodes.

• I like the way Dallas played tonight, but I wouldn’t bet on them in Game Six.

• We’ll end it with my favorite TNT exchange of the evening…
BARKLEY: Calderon…my second-favorite Jose in the world.
KENNY: Who’s your favorite?
BARKLEY: Cuervo.