Links: We Are All Witnesses 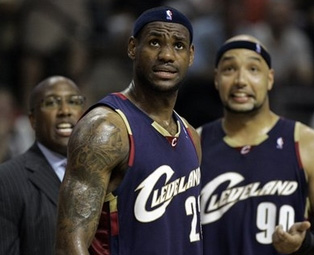 Just a quick note here before we get our full game notes posted, but…

If you missed it, not only are you kicking yourself right now, but LeBron just turned in one of the the best Playoff performances I’ve ever seen. Just amazing stuff. In Cleveland’s 109-107 double overtime win tonight, LeBron was unstoppable. He finished with 48 points in 51 minutes, but even more impressive was the way he single-handedly beat the Pistons; nobody in a Detroit uniform could come close to even slowing him down. The dunks, the fading jumpers, anything he shot seemed to go in.

With the game on the line, from the 6:00 mark of the fourth quarter, LeBron scored 29 of Cleveland’s last 30 points. And he scored all of their last 25 points.

Bron deserved to win that game, but the Pistons kept it close and kept taking the lead, But Bron fought back each time. Then he won it with a 1-on-5 layup.

Why wasn’t Detroit triple-teaming LeBron each time across? No idea. Maybe Sam Mitchell was coaching.

Anyway, more tomorrow. And if you saw it, feel free to leave your thoughts here. Where does LeBron’s performance rank among the all-time great Playoff performances?

(And will someone please tell Reggie Miller to stop talking so much? Good grief, he won’t let Barkley get a word out. I’m turning off “Inside the NBA” because of him.)