Links: Who Is Mr. Ping Ping? 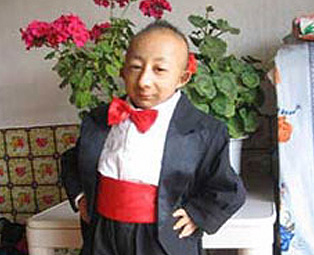 Yesterday I linked to this story about the world’s tallest man meeting the world’s smallest man, which I enjoyed on several levels — that odd looking giant (wearing adidas), the tiny man with the oddly fastened bow tie.

Well, the story swept through the SLAM Dome, particularly resonating with my coworkers Leah and Vanessa from XXL Magazine. And while we all liked the tall guy, I just can’t get enough of Mr. Ping Ping.

As for Mr. Ping Ping, there’s not a lot of information about him on the internet. Beside the story I linked to earlier, I found this story, which basically just repeats a lot of the same information. And there’s this video, but we don’t even get to hear from Mr. Ping Ping on the video.

Anyway, I like Mr. Ping Ping. I like what he stands for and the way he attaches his bow tie. I like the way he’s standing in this photo, hands on hips, as though he’s expecting something to happen but he’s not quite sure what. But mostly I like his name: He Ping Ping. And Mr. Ping Ping cracks me up every time I hear it.

So now we need to make sure his name stays out there, and I think the best way to do that is by appropriating his name for an NBA player. Which is where you guys come in.

You have a few days, or until I pick a winner. Get to it…