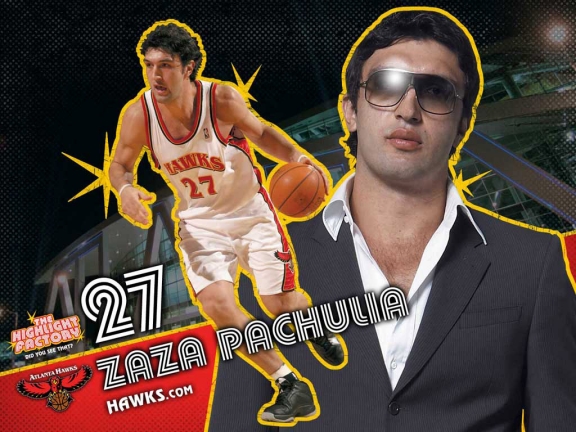 Over the weekend, I had the pretty incredible opportunity of embedding with the Atlanta Hawks for a feature in the next issue of SLAM. I spent 24 hours with the team, from taking their charter flight with them on Friday night from Atlanta to Dallas, to staying in the team hotel, to attending the morning breakfast meeting in its entirety, to sitting in for Coach Woodson’s pregame pep talk and hearing his postgame remarks, then flying back to Atlanta late at night on the Hawks’ charter.

It was a remarkable trip, and I was able to see first-hand things I’ve wondered about for ages. And I should say here a very big thank you to Coach Woodson for opening his team up to me; he never asked me not to write anything or go anywhere. It was a very, very interesting trip, and I’m going to try hard not to talk much about it until the next issue of SLAM drops. Despite getting endless stories from the trip.

(For instance, a sentence I never thought I’d hear Mike Woodson say, but I undeniably did hear him say this: “Do the stanky leg!” Context will be presented in the next SLAM.)

Even though I was only around for the team for about a day, I took about 20 pages of notes, so I’ll probably spend most the week whittling that stuff down into a more manageable few thousand words.

But one thing I thought was funny…

During the pregame time on Saturday night in Dallas, I was in the locker room talking with Joe Smith. I’ve had about a dozen NBA players tell me independently of each other that Joe Smith is the best rapper in the NBA, but I’d never really talked to him about it.

So Saturday night, maybe an hour before tipoff, I was sitting in the locker room observing, and Joe Smith and I started talking about his love for hip-hop. (Joe is supposedly going to email me some tracks to post here, eventually.)

Zaza Pachulia was sitting nearby, and he walked over to me and Joe and said to me, “You know I recorded a rap song, too, right?” He turned to Joe, “Remember I played it for you in Milwaukee?” he asked, referring to when both Joe and Zaza played for the Bucks back on 2004-05. Joe said that he did remember that.

“Wait, wait,” I said. Now, with Zaza, not much surprises me. The dude is a renaissance man. He’s always been fashion-forward and interested in continental things. He’s just as comfortable talking about AC Milan as he is talking about food — he recently bought an Atlanta restaurant which will have a big re-launch in January.

“Yeah, I was on a rap song,” Zaza confirmed.

Did you write it?

“No, someone else wrote it, I just performed it.”

Was it in English?

“No, it was in Georgian.” (Zaza is from the country Georgia in Eurasia.)

Was it you by yourself?

“No, I was with a rapper from home. I just rapped a verse.”

At this point my head was spinning. How did I not know anything about this? So you really had your own rap song?

“Yeah man. You know Tupac? I’m Z-Pac!” And then Zaza turned and went out to the court to warm up.

Hmm, I thought. Learn something new every day.

I made a note to ask Zaza later about getting a copy of the song, but I never had a chance.

Then late last night, as I was going through and transcribing my notes, I saw my note about Zaza’s rap career, so I looked it up online. And I found it. No idea what they’re rapping about, but Zaza comes in around the 1 minute mark and goes for an impressive time.