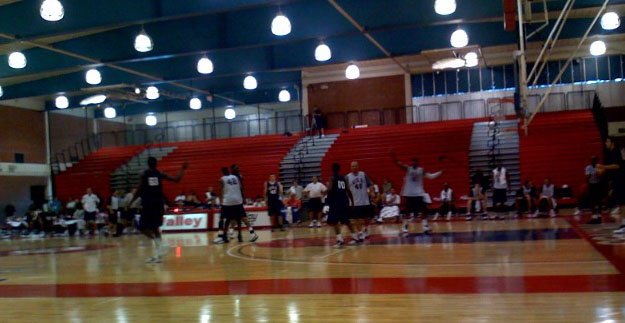 Saturday was scrimmage day for Team USA. The Senior Team played against the Select Team in a series of four full-court, 10-minute scrimmages. I was on hand for the final two, after the Senior Team had already made it’s statement, winning the first two. The Selects brought a high intensity to game 3, as they were looking to post their first W of the session, and they were going against the Senior Team’s big guns.

Lineups were as follows: Jason Kidd, Kobe Bryant, LeBron James, Carmelo Anthony, and Amare Stoudemire vs. Devin Harris, J.J. Redick, Jeff “J.G.” Green (can we get a better nickname guys?), Andre Iguodala, and David Lee. The Seniors weren’t lackadaisical, but it seemed like maybe they felt their point was proven in the earlier games. Maybe it was the zone D employed by the Selects, or maybe it was the “we can turn it on vs. these youngbloods” effect, but the Seniors were resigned to gun (and miss) from outside, and play bad defense. Kobe bricked four early Js himself, while the Selects, led by David Lee’s two slams out the gate, made their way to basket with ease.

The 11-6 score made the game seem closer than it was. The Seniors tried to step it up on both ends, highlighted by a LeBron drive-and-foul (though he missed the free throw) and a strong block by Kobe on Al Jefferson. Jefferson tried to put up a baby hook, and Kobe was right there to stuff it before it left the new Timberwolve’s hand. Sick.

The Seniors even tried to put a full-court press on, perhaps to rattle the young Aaron Brooks. However, Brooks, the quickest player on the floor, handled it with ease. He had a few nice drive-and-dishes, and knocked down a J. If he can do this against the best of the best, Houston should be happy with what he brings them. The Seniors were held at bay, and after Dwight Howard apparently committed a flagrant foul on Jason Kapono (Howard reached as Kapono went by for a floater attempt, and Kapono lost his balance and fell… probably not a legit flagrant), the Selects had the game on lock, cruising to a 26-16 victory. The Senior squad definitely played this one like a group of big brothers playing the neighborhood young’ns, not quite giving them the respect they deserved. Play like that could haunt them in the upcoming tourney.

Other game notes: As the previous game wound down, Kidd, Kobe, Bron and Melo all sat at the end of the bench, forming a sort of Team USA Mt. Rushmore… There was a ton of chatter on the court, including trash talk, defensive communication and encouragement. Chemistry looked good… LeBron and Kobe were the most vocal, especially in terms of pure loudness!

The Seniors started with Deron Williams, Michael Redd, Mike Miller, Tayshaun Prince and Nick Collison for the final match up. Like their Mt. Rushmore brethren, this five kept it perimeter, but the shots came in transition, and even more importantly, these guys were hotter than the 105+ degree weather outside. But it wasn’t the dry heat typical of a desert, it was the heat of wet J’s. Williams and Miller hit back-to-back 3’s to set it off, while Nick Collison held it down on the inside, with a number of power moves, dunks, and trips to the line. One particular follow dunk on the head of a Select, had the whole Senior bench going nuts. Collison made a strong case for inclusion on this summer’s roster, especially since Coach K has already lost the services of big man Chris Bosh (Apparently, he really brought the thunder earlier in the day. The rest of the rims on the court advised Coach K to cut him ASAP!).

Just when it looked like the Seniors might take 3 out of 4, in came the big guns, and everything changed. Amare threw down one of his trademark, out-of-nowhere, quick power slams, and Melo had a nasty follow dunk, but Mt. Rushmore stayed outside too much again, bricking everything, and they let the Selects back into the game. No one in particular stood out, but as a team, the Selects kept grinding away, closing the margin, and finally tying it up with 24 seconds remaining.

The Seniors had the ball, with the Mamba looking to perform his usual clutch heroics. Even though he hadn’t hit a shot in the last two games, he still faced a double team. He passed to a cutting Kidd, who uncharacteristically fumbled the ball, and they didn’t even get a shot off! Time for some free basketball, in the form of a 3-minute OT period. The Selects held a 3-point lead with about a minute left in OT, when Amare had a chance at an and-1. The whistle blew and the ball hung on the rim, about to drop, when Melo, perhaps inspired by his earlier follow-dunk, goal-tended and ruined it. Amare only knocked down one, they failed to get the rebound and had to send Jeff Green to the line on the other end. Green failed to lock it up, though, going 1-for-2, with the Senior bench yelling “too much pressure”. The Seniors had one last chance, but Melo, trying to atone for his previous gaffe, missed an open three. Al Jefferson went to the line, sunk 1, and the Selects won their second straight, 39-35.

Other game notes: I’ve discovered the secret of successfully coming back from microfracture surgery. While on the bench, both Kidd and Amare held 3 feet tall cylindrical objects, similar to rolled up yoga mats… Tyson Chandler didn’t play in either of this contests, but did his best Mateen Cleaves impersonation from the bench, leading the cheers… After a call that went against the Selects, everyone was giving the refs a hard-time, especially Channing Frye. His voice was heard over everyone else saying “Foul, gray shorts!”. It was comedy. The ref he was referring too wore some particularly odd-fitting gray shorts, and Frye’s comment had the whole gym howling… At one point J.J. Redick was manning up Kobe, and they stood isolated at one end of the court during free throws. I couldn’t help but think about the amount of hate those two have experienced over the years. Maybe they got in a quick counseling session.