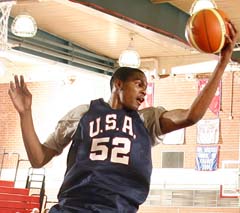 It has only been three days since the Redeem Team took down Spain, bringing both international respect and the Gold medal back to the United States. However, if Americans have a tendency toward anything, it’s looking ahead to the next big thing.

It’s time to look ahead to London with the leaders of the new school, a band of brothers who will bring another gold medal to the U.S. in 2012.

It will be a team of extreme size, extreme strength, and extreme skill.

Five Who Should Stay

LeBron James – While the peoples’ champ in Beijing was Kobe Bryant, the man putting in the work during film sessions was LeBron. This is one of the many reasons Team USA will gladly hand King James the captain’s crown in 2012. James was the equivalent to Scottie Pippen in the 1992 Barcelona games, giving the U.S. an incomparable match of size, quickness, and helped strengthen a team that was desperate for weak-side help and

Chris Paul – The best point guard in the game put on a clinic as he broke down both man-to-man and zone defenses, opening the door for Kobe and company to light it up downtown. Paul has yet to hit his peak and could take the torch from Jason Kidd, a man who never lost in international play.

Deron Williams – The past year has placed Deron in CP3’s shadow, but there is no question that the Jazz guard is as coldblooded as Rick James. He’s a proven winner who lives for the big shot. Williams never shies from a 3-point opportunity, will continue to step up when needed, and also offers an intriguing double point guard lineup alongside Paul.

Dwyane Wade – Any doubts about Flash’s ability to compete at an international level after numerous injuries have been put to rest. Wade’s comfort level grew throughout the games, his ability to slash to the basket is back, and he is the man you want taking the shot at the end of the game. Sorry LeBron, but we haven’t forgotten Wade was an NBA Finals MVP, and soon enough the rest of the NBA public will remember too.

Chris Bosh – All due respect to Dwight Howard, but Bosh was the true Superman down low in Beijing. Bosh represents a better all-around threat, a more aggressive defender who understands and – get this – patents his game around the FIBA rules. Bosh will make free throws when it counts, continue to be hungry on defense, and stand up to the Luis Scolas of the Olympics games.

Greg Oden – The main question mark in the 2008 Olympics was the lack of big men. That won’t be an issue in London where the best center prospect since Shaq will bring unstoppable shot swatting and rebounding potential.

Oden will also bring a fresh personality that Team USA had been lacking for quite some time.

Amare Stoudemire – Due to injuries and concern about his long-term ability to stay healthy, Amare had to turn down a golden opportunity with this year’s Redeem Team. That shouldn’t be an issue in 2012. Stoudemire’s ability to run the floor in an up-tempo game will make Team USA even more formidable. His recovery from micro-fracture knee surgery only made him better offensively, as he had to ditch the dunk and develop a mid-range game. Any center who can hit the FIBA three is a huge asset.

Al Jefferson – Any player who can make Minnesota fans feel ‘okay’ without the likes of Kevin Garnett deserves consideration. Not only is he one of only five players averaging 20 points and 10 rebounds a game, Jefferson is a quick scorer who will clear the defensive board. Yes, you will surrender a bit of defensive intensity when you put him in, but consider the fact that he could play next to Oden and things don’t seem so unstable down low. We would guess that Jefferson also would be motivated to step up his defensive prowess around the rest of Team USA.

Kevin Martin – The game’s most underrated scorer will answer the call when it comes to creating fast break chances and knocking down the outside shot. More importantly, Martin gets to the free-throw line 9.5 times per game in the NBA. His 87 percent free throw percentage is assurance enough that he will knock down the free-be’s. He could be an invaluable asset in close game situations.

O.J. Mayo – Imagine Dwyane Wade with deeper range and you have what

Mayo might become. Mayo’s a great ball-handler who can play both guard positions and can light up the scoreboard from anywhere on the court. His solid defensive play makes him perfect in a half-court trap. His unprecedented work ethic will be key in motivating other players who may grow fat from the 2008 feeding frenzy.

Brandon Roy – A born leader, B-Roy will be the quintessential play-maker as well as one of the best all-around players by the time 2012 rolls around. Roy won’t flinch at any defense thrown in his way, nor will he hesitate to get in a teammate’s face. Like his Blazers teammate Greg Oden, Roy will serve as a positive influence and an ambassador to the game.

Al Horford – Arguably deserving of the Rookie of the Year award last season, Horford is the ultimate garbage man. Horford’s physical man-to-man post defense will help should any team muscle up against them. Foreign teams will learn – much like the Boston Celtics did – Horford’s tournament experience gained from two titles at Florida University make him a proven winner and fearless competitor.

Kevin Durant – By 2012, Durant will be one of the most versatile scorers in the game. Durant lives for the big game and will be a dead-eye from the 20 foot FIBA

three-point line. Plus, if (a big if) Durant puts on some size and commits to playing solid defense he will be a nightmare for opponents to contain, a true all-around threat.

Rudy Gay – Gay will bring a tremendous amount of athleticism along with an expanding range. Gay attacks the glass, plays with a chip on his shoulder, and will get in the heads of defenders.

Joe Johnson – Another underrated player who shined brightest in the playoffs, Johnson is the smoothest scorer in the game, easily able to take any defender off the dribble. The importance Johnson’s size and shot selection could offer Team USA is immeasurable. He can spot up or shoot off the dribble, and will be a backbreaker when it comes to the 3-point line.

Adam Sweeney is a graduate of Texas Lutheran University. You can read more of his writing at SI on Campus, Talkhoops.net, and Filmschoolrejects.com.