Looking Back Before We Jump Ahead 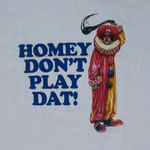 After not watching TV for a solid week because the St. Louis Cardinals ruined my month, I watched bits and pieces of five NBA games on ESPN Classic this weekend. Here’s what went down:

This was the first real epic LeBron–D Wade showdown. Even though they both played well, a game that featured obscene clutchness from Malik Allen and a Juanny Wags game winner can only serve to show how far Bron and Wade have come leadership-wise.

The Lakers break out the brooms in Sacto. Hedo Turkoglu goes off but it’s not enough to save the Kings. It’s worth mentioning that Hedo’s last name is pronounced Turk-a-loo, not Turk-a-glue. I’m willing to go out on a limb and state that we all have at least one friend that makes this mistake.

The best part was watching a misty eyed Chris Webber leave the court. He was so visibly emotional and nostalgic that you could have cut the palpable tension with the axe that the media began to grind once they realized C-Webb was becoming the player everyone knew he could become. In the financial irony of ironies, he almost came to New York.

In a related story, I was recently paid $100 to talk to the Axe Body spray people about my deodorant. Aside from any SLAM earnings, that was the most enjoyable money I’ve ever made. I’ll walk you through it in the comments section if you really care.

Money goes off for 57 on 22-37 from the floor. Larry Stewart may or may not have crapped the bed. That was the eighth loss in a nine game skid for the then-Bullets. Somebody send Wizznutz a fruit basket. I caught the first five minutes before hitting the pillow. Two things:

* = HowAboutDemApples Inc. barely recognizes the inherent hypocrisy in trademarking a pun after basing your own non-existent company on a pun. We (royal) also recognize that upon reading this Mark Cuban might suddenly become afraid of a Grant bros. conglomerate and buy it out for a few hundred thousand dollars and some Jack Haley chest hair. Not that we’d blame him.

The Nets play their hearts out, but Kobe and Shaq are simply unstoppable.

Speaking of classic, Rest In Peace, Red Auerbach. It’s your world, we just continue to live in it.