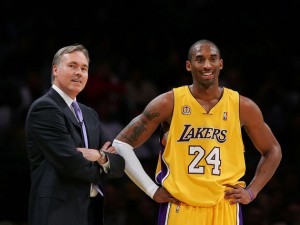 Most Laker fans too busy chanting “We want Phil!” to notice Mike D’Antoni’s claim that he would be the perfect fit in Los Angeles, as everyone quite reasonably assumed the Lakers were about to hire Phil Jackson for a third time.

After Jackson’s demands were deemed a little too much by the front-office, Mike D’Antoni has signed a mulit-year contract with the Lakeshow. The deal will reportedly pay D’Antoni $12 million in three guaranteed seasons, and includes a team option for the fourth.

Lakers spokesman John Black confirmed on Sunday night that the team has signed Mike D’Antoni to a multi-year contract. The team is expected to have a press conference to announce the deal most likely on Tuesday or Wednesday of the coming week. According to Black, Lakers owner Dr. Jerry Buss, executive vice president Jim Buss and general manager Mitch Kupchak were unanimous that D’Antoni was the best coach for the team at this time. Kobe Bryant and Steve Nash both expressed support for the idea of playing for D’Antoni, who was Nash’s coach in Phoenix when the point guard won consecutive MVP awards in 2005 and 2006.

“After speaking with several excellent and well-respected coaching candidates, Dr. Buss, Jim and I all agreed that Mike was the right person at this time to lead the Lakers forward,” said GM Mitch Kupchak. “Knowing his style of play and given the current make-up of our roster, we feel Mike is a great fit, are excited to have him as our next head coach and hope he will help our team reach its full potential.”

In addition to Phil Jackson’s steep demands — a salary in the $10 million/year range, reduced travel for road games, more say in personnel decisions — the Lakers apparently felt that the Triangle Offense wouldn’t be the best way to maximize a roster featuring Steve Nash and Dwight Howard, after the team struggled to adapt to the Princeton Offense.

So, shockingly, here comes Mike D’Antoni and his Seven Seconds or Less attack.

Let it never be said that the Los Angeles Lakers are a predictable organization.