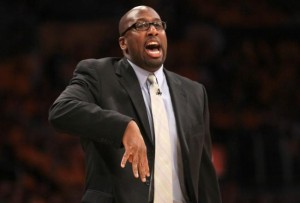 It’s early in the season, really early, but this remains worth noting: the Los Angeles Lakers (1-4) are currently the worst team in the Western Conference.

After losing in Utah last night, looking listless and clueless in the process, more loud and angry questions arose about head coach Mike Brown’s job security. According to Lakers’ management, though, they will remain patient, and continue to have confidence in their bench boss.

“You don’t start 0-3 for the first time since we’ve owned the franchise without being on top of it,” Lakers executive VP Jim Buss said. “No matter what, you have to be aware. That doesn’t mean change is coming. That just means you have to be aware.” But while fans and pundits have placed the blame for the Lakers’ early struggles on coach Mike Brown, Buss said he’s still very confident in his coach.

“I have no problems with Mike Brown at all,” Buss said. “He just works too hard and he’s too knowledgeable for this to be happening. So either the system is flawed or something’s going on. Or, like the Triangle, it’s very hard to pick up and understand. I’m not a basketball mind like he is or the players are, and the players are fine with it, so I just have to be patient.” […] “Kobe [Bryant] and I have a relationship where he can just look at me and say, ‘Everything’s cool,'” Buss said. “So yesterday during practice, I gave Kobe a quick glance, and everything was cool.”

Regardless of the front-office’s reassurances, there is palpable tension in the Laker locker room. Kobe Bryant is seething, fans and media are losing patience, and it’s clear that the team needs to turn things around quickly.

Despite some head-scratching decisions, and his inability to get his wildly-talented team on the right track, Mike Brown’s job doesn’t appear to be in jeopardy.

But it’s fair to say that Brown’s seat is growing hotter by the day.