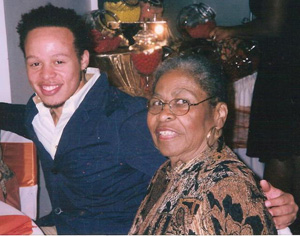 Do you remember your first NBA game? The first game you really watched? Do you remember how you were originally introduced to the game of basketball? I do. I was only 10 years old.

My great aunt, my Aunt Mil, always used to talk about the New York Knicks. She looooovvvvved Patrick Ewing, Charles Oakley and John Starks. She always used to talk about how Michael Jordan and the Bulls were so great, but it really irked her that he kept Ewing from getting to a championship all of those years. She lamented so about how Starks would get short-changed by MJ, how Patrick seemed to always play hard but kept getting outdone at the wrong times, and how (in general) Pat Riley and Jeff Van Gundy could never seem to close out when their number came up. Don’t even mention the 1994 NBA Finals. That final game of the series, the one that Starks played so terribly in, and the one that could’ve given New York another chance for a championship, she was distraught. That was the first game I ever watched, and from that game alone, I became a fan of the NBA. Aunt Mil taught me well. We’d talk in profound animation about the League, she being a 62- or 63-year-old woman at the time, and I, barely in double digits in age.

She was the one that suggested that I go to my cousin’s basketball camp in Springfield, OH that summer of ’94 (also the summer I discovered rap music—Warren G’s “Regulate…G-Funk Era”, Da Brat’s “Funkdafied” and Bone Thugs-N-Harmony’s cassette maxi-single of “Thuggish Ruggish Bone” were my muses). Jayson Gee, a former Ohio University assistant coach who worked specifically with former NBA lottery pick Gary Trent, former St. Bonaventure assistant, and current Cleveland State assistant, started the “Operation Giveback Basketball Camp” as a means to literally give back to kids in the city who didn’t have the money to go to a Wittenberg University summer camp or Ohio State University/Nike camp. She told her sister, my grandma, to get me signed up, I got in there with cousin Jayson and I started my journey in the wide world of basketball. Soon after, I’d come over and watch whole NBA Drafts with her and be writing out full rosters of the recent draft picks in tow (from memory, mind you), all while she and I would be speaking about the selections.

I mention all of this, because the holidays are here and in celebration now. It’s the time of year where families, dear friends, and other loved ones come together, and for better or for worse, see each other and can

reflect on the times, and if you’re part of my family, we have a joyous time with one another. For me, I’m reflecting on all of this because as I’ve sat here to write this column, I do so only a few hours after my dear Aunt Mil passed away from complications from an invasive hip surgery—the day before Christmas Eve. She was 78. I saw her three days before, and she was in great spirits and I was due to be talking to her about the NBA when Christmas was to come.

She was not only the reason for my exposure to the NBA, but she was one of many extended family members who shaped and molded me into who I am today. I owe much to her. So…as all who read this are getting into the various spirits of Chanukah/Hanukkah, Christmas, Kwanzaa or whatever-whatever, keep in mind what you love, who you love and all that you have. Sometimes, you don’t ever truly realize what you have until it goes, but I was fortunate. I knew what I had in my Aunt Mil, and now that I’m following my passion, I realize even more through the game of basketball what she gave me. Even though she’s now physically gone, I am truly, truly blessed, yet and still.