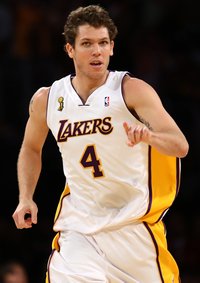 Last season, Luke Walton had to worry about more than just keeping Phil and Kobe happy; he literally had to sleep with one eye open because he was being stalked by a deranged fan (who claimed the two were supposed to get married).

A 34-year old woman was arrested last month and charged with stalking the Lakers forward. After months of harassment, Walton finally decided to get the cops involved after she made a menacing gesture towards him. From the OC Register:

“It’s bananas,” said Walton. “I’ll be going to sleep at night and just randomly look out the window. Just to check. Just because. She has been out there at 12:30, 1:30 in the morning. She would park outside my house for hours and hours.”

“I would drive out, and I would see her peeking through. It would suck, because I know I’m leaving my home, and I know she’s still there. What am I supposed to do? Is she planning on breaking in? Am I going to come home one day and she’s sleeping in my bed? Is she going to steal my dog?”

As wild as that story may be, I’m actually surprised it doesn’t happen more often. The world is certainly not lacking crazies.