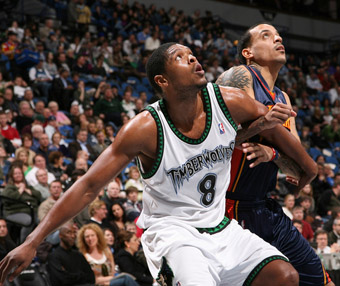 Judd Spicer is a veteran freelance and fiction writer in St. Paul, MN. His work has appeared in various print and electronic forms over the past eight years and his debut short-stroy collection, Seven Days, was nominated for a 2003 Minnesota Book Award. Judd reached out to me via Tony Gervino last week pitching a Ryan Gomes story for SLAM; seems he’d hung with Ryan for a publication out there but the story didn’t run. I didn’t have room in the mag, esp after Myles’ nice piece on Al Jeff in the current issue, but we’ve always got room for a good piece on the website.—Ben Osborne

I had the turkey club and a watery domestic beer. Gomes had the barbecued chicken sandwich with fries and a water. Gomes, as in Mr. Ryan Gomes, Minnesota Timberwolves forward, recently acquired along with four of his former Boston Celtic teammates in the July transaction that sent some tall, seven-foot jump-shooter over to the east coast and gave the Wolves’ team photographer a great wealth of new faces for his portfolio.

Alas, heading into the New Year, the initial returns on the blockbuster that put Kevin Garnett in green may appear bleak on this end, with Minnesota and Boston donning nearly inverse records. But as I lunch at the NBA City Restaurant with the former First Team All-American from Providence College, I note no wrinkles carved into his twenty-five year-old face brought on by the stress of early-season disasters, nor do I detect any other cosmetic fractures that the pains and anxieties of incessant losing can bring: no premature loss of hair, no reddened eyes, no gnawed fingernails. Given the facts that this guy is a life-long east coaster who was born and raised in Connecticut, starred for the aforementioned Providence, and then quickly ascended from a somewhat-overlooked second round Celtic draft selection in 2005 to an NBA All-Rookie Second Teamer and eventual Boston starter- one could easily assume that the fella’s appearance and demeanor might have quickly changed upon arriving amidst the chaos that has defined the sporadically-spectatored seats that define the modern day of Target Center.

But no. This is not the case in the slightest.

Rather, Gomes comes very much as advertised: polite, handsome, well-spoken. But perhaps his path to Minneapolis should have afforded me the expectation of such virtues. Gomes is, after all, something of a rare entity in the NBA. A four-year college grad with a degree in Social Sciences, he also had a year of prep school to boot. A recent study of the league found that about 40% of players are four-year college guys, although that research was from ‘05, and didn’t consider players who actually earned a degree. In addition, it should be noted that Gomes is recently married with his first child on the way. All told, the guy is unique. He’s sharp. He’s a grown-up in a league where adolescence has run amok.

And while star forward Al Jefferson was no doubt the on-court gem of the K.G. trade, Gomes’ maturity and polish- both on and off the court- have quickly deemed him far more than just a “throw-in” for what stands as the largest transaction of myriad players exchanged for one body in NBA history.

“It’s not to say that you have to go to college for four years,” Gomes explains. “Some guys are talented enough to just go one year, two years. Some guys are mature enough, physically, to do this. So I don’t want to say you can take that away from them. But in college, you can get a little different perspective. Not just in basketball, but in life. Time management is a big thing. You’ve got to hold yourself responsible.”

When watching Gomes’ game, the tenet of Personal Responsibility is readily evident. And while neither his lack of endorsements (sans some Adidas apparel), nor his career numbers (9.8 points per game, 5.1 rebounds per game), or current stats (8.6 ppg, 4.0 rpg) have, or perhaps ever will make him a household name to the periphery NBA fan, actually watching him play, night-in-night-out, one gains an appreciation for the things this guy does that don’t end up in the ensuing morning’s box score. Not particularly tall at 6-7’, nor bulky at 250 lbs., Gomes has been labeled by many an expert prior to this hand as something of a “tweener.” Such was the knock on him coming out of college: too small to bang with Power Forwards, yet to big to stay with the Smalls. But that’s just writing, really. Just words.

Because when watching Gomes play, the aforementioned edict of Personal Responsibility may as well be stitched into the back of his jersey. The guy defends very well. He hustles endlessly. He scraps for rebounds, makes sharp passes, protects the ball, plays smart, and employs his athletic frame with just enough bulk to sway the Small Forwards, while also utilizing his lithe physique to skirt between the Bigs for loose change.

All of which segue into an obvious inquiry: Where does this guy on a losing team, without a true position, without a max contract, without soda or underwear or cell phone or video game endorsements, view himself and his legacy in the NBA mosaic?

“I see myself right in the middle,” Gomes says. “I want to win as much as anybody in this league. At the end of the day, guys are remembered for being a part of Championship teams.”

Gomes pauses briefly to consider his continuation to this thought, and also to attend to his lunch. And I silently note how very polite he is, how well-mannered: bending his long, upper-torso down toward the table so as to not create a mess or speak with his mouth full; quietly addressing his pre-ketchuped fries with a fork; never allowing said utensil to ever make contact with the table, rather leaning it upon the side of his plate.

“Individually, you want to be remembered for what you stand for,” he says. “Me: I’m a hard-working player, a guy who does the little things, doesn’t care about scoring this many points, grabbing this many rebounds. I want to do what my job is, as asked by my team and my coach . . . Coaches know what they can get from me every night. It’s a trust issue.”

For some guys, this kind of thing is just talk. Yet for Gomes- long lauded in Boston for his utilizing an advanced basketball I.Q. to achieve this job- here is a player whose life is emblematic of his verse. In Boston, he was quick to extend his skills beyond the court, as evidenced by his recipience of the 2006 Shamrock Foundation Community All-Star Award for his efforts outside the Celtics’ Garden.

And although he has traded green-and-white for whatever nine colors the Wolves now don, Gomes hasn’t transacted his desire to use his NBA status to better his environment. In 2005, Gomes, after learning that a player from his former AAU program had collapsed and died from Sudden Cardiac Arrest, began Hoops for Heart Health, an organization that donates heart defibrillators (at $1,500/per unit) to athletic centers around the country. This year, Gomes will donate 12 units to NBA cities that the Wolves visit on the road. Next year, he hopes to deliver to the remainder of the league’s cities.

“I’m just trying to bring the awareness to the people, that this is a huge thing,” Gomes says of his work with defibrillators before speaking toward his vast and assorted community efforts. “I’m in a position where some people will listen to what I have to say. When I was ten years old, I would have loved for an NBA player to come to my school to read a book, or anything like that. So, my community work is in regard to how I would have loved that. I want to put smiles on kids faces. You never know how far that can go.”

And as Gomes says this with a smile upon his own face, I soon realize that I now have to let him go. The Wolves will face the Seattle SuperSonics in a few hours hence, and the forward has much to do prior to tip-off.

We exchange our pleasantries and the like, address the bill, and then he walks off, back toward the Target Center court, where, tonight, the sheen of all that parquet, and the halftime dancers, and the bouncing mascot still won’t be able to dull another early-season loss.

But I suppose this court has seen worse. No, not suppose- as a season-ticket holder since 1989- I know it has. Yet, records be damned for the moment, as gone now are the childish cries of Rider, and Marbury, and Sprewell, and Davis. Replaced, by the howl of a man.