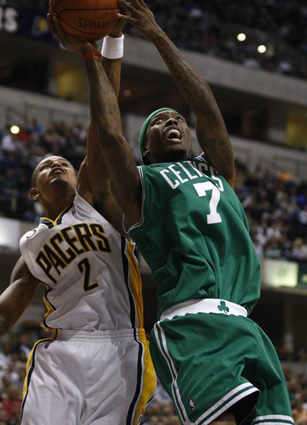 Between the droopy eyelids and the Rasta-like hair and the calm that pervades his speech, Marquis Daniels emits a laid-back presence. There’s nothing wrong with his look. But lately, that sleepy, I-don’t-take-anything-too-seriously vibe hasn’t worked in Marquis’ favor.

Like fellow Mount Zion (NC) Christian graduate Tracy McGrady, Daniels appears to be in need of a good nap based on his tired eyed look. And like his fellow Floridian McGrady, Daniels has suffered through somewhat of an injury-plagued career—having appeared in 56, 60, 62, 45, 74 and 54 games. And now that he’s missed all of the Celtics games since December 4th while rehabbing from surgery on his thumb, the haters are out in full force, taking shot at their target while he’s down.

Yes, Daniels’ facial features can make him come off as subdued. Yes, Daniels has plenty of tats—some serious, some less so—plastered all over his skinny 6-6 frame that people love taking shots at. Yes, Daniels has had injury issues for a large part of his NBA career. But no; contrary to how people assume he’s a lazy player, and perhaps lazy person, it’s not true. Marquis Daniels goes hard at everything does.

Some have mistaken Daniels’ laid-back disposition for laziness, taking his chill demeanor and making it into a negative. Some have claimed that he, again like they say about Mcgrady, doesn’t care about basketball. “Some” must not have had the chance to watch him play.

What Quis lacks in flash and flamboyance he makes up for in grit and hustle. Undrafted out of Auburn, the Mavericks snatched him up—clearly seeing something in him that many missed. He promptly repaid their faith in him, averaging 8.6 ppg in 18.6 minutes per as a rookie, better stats than many first or second round picks posted. He wasn’t done, though. Daniels proceeded to average 16 points, 6 boards and 3 assists in his first career Playoff series.

Do people who don’t like an activity continue to pursue that activity even after being told they can’t do it? No. Most would give up. Passed on for the likes of Ndudi Ebi, James Lang, Rick Rickert and plenty of other players who are long gone from the L, Daniels continued to pursue hoops.

Once he made the League, though, that could’ve been enough for him, right? That could’ve been all he wanted to accomplish. He could stop hustling, could stop playing when he was even slightly hurt. Yeah, maybe. But do satisfied players, players who don’t care about the game, step it up come Playoffs? No.

The haters still want to hate, though. They still want to point out the amount of games he misses, the amount of injuries he suffers. Guess they still haven’t watched him play. If they had, they’d have seen him guard his man with a tenacity that belies his slight body. They’d have seen him haul ass to get back on the break in hopes of saving an easy layup. They’d have seen him dive on the floor with abandon, fight through picks, celebrate after a game-winner with more enthusiasm than many. If they really knew him, they’d know he plays hurt. They’d have known he was in pain long before he finally had surgery on his thumb. They wouldn’t be punishing him for trying to play hurt, for not wanting to miss time. If he didn’t love the game and play hard, like they say, he wouldn’t have even got injured. He only suffered the injury because he tried playing  when he was hurt, worsening his thumb every time he caught a pass or grabbed a rebound.

The haters don’t want to dig deeper; they never do. They see his stats, they see his tats, they hate on him. They don’t care what the ink means to him or ask why he has them. They don’t try to understand that his stats represent what is needed of him. And it’s not Quis’ job to make them dig, to make them better understand what the ink means, or how hurt he was, how bad he wants to suit up. It’s Marquis Daniels’ job to play basketball. And now that his cast is off and his rehabbing is well underway, he’ll be back to doing that—doing what he loves—shortly.

Understand: Marquis Daniels loves basketball and is chomping at the bit to be healthy and back on the court. Understand also, though, that Daniels isn’t just a basketball player.

A couple of months back, at a preseason game in New York, Marquis, Rasheed Wallace and I were examining an issue of XXL Magazine. A lot of words were spoken. A few laughs were shared. In truth, I don’t remember much of the friendly banter exchanged. The one comment I do remember, though, opened my eyes to Quis’ no. one hobby.

“If I were to be on the cover of SLAM, I’d want to the cover to show more than one side of me. I’d want the cover to be me wearing my jersey on the right half of my body, and the left half should be me in the clothes I’d wear to perform at a concert. Kinda like an XXL and SLAM cover combined.”

When not playing for the Mavs, Pacers and Celtics, under the name “Q6” Daniels has recorded with the likes of Gucci Mane, Lil Boosie and Trina. Quis knows writing rhymes makes him a walking cliché, but he doesn’t mind. “It’s typical. All basketball players want to be rappers,” says Daniels. “But don’t all rappers want to be basketball players, too?”

For Daniels, basketball has always come first, second and third, but rapping was never that far behind. Growing up in Orlando, the first tape he ever bought was of the Beastie Boys, and he’s been hooked ever since.

“I listened to everything, man,” laughs Quis. “I was on UGK, OutKast, 8Ball and MJG, all those guys. After a while I started rapping and rhyming myself, all around the neighborhood and in the cafeteria.

“Once I got to Auburn, I started actually recording. Yeah,” laughs Daniels, realizing how crazy it sounds now in retrospect, “I was recording on a tape recorder, trying to time my rhymes with the beat on tape.”

That’s how Marquis is; he makes things happen. Once he takes on a project, once he starts something, he sees it through.

Now playing in his seventh NBA season, Daniels is comfortable enough to make some of his music public. He’s got some tapes out online, and he finished a project recently titled “Loyalty.” In the meantime, Quis was nice enough to hit us with this track called Do it Then. (Keep in mind that it’s a rough cut and not a finished recording.)

Hate it or love it, Quis is used to hearing a lot of both. Just keep your opinions of his game and rhymes 100. As Marquis Antwane Daniels said recently on Twitter, “I rather be hated than receive fake love.”