Madden, Bonzi and a fake Bassy 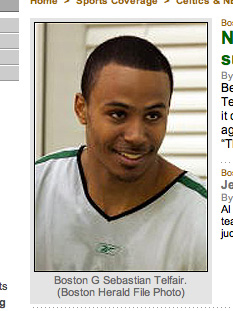 I spent about 45 minutes last night immersed in the create-a-play mode in Madden trying to draw up the option formation and plays that the Falcons have been running all year, only to discover there’s no option option. So I guess it’s not in the game. Two weeks until training camp…
• There’s a new player in the Bonzi Wells Bonanza: The BETcats! Nobody saw that one coming. Of course, when you have a lot of young, impressionable guys on your roster, you need a friendly vet like Bonzi to tutor them.

• The Boston Herald has a story about Sebastian Telfair with a picture of…someone who is not Sebastian Telfair. Anyone have any idea who this is in the picture?
• We all know what this means: Sensitivity training for everyone at MSG! They should all have to read Khalid’s latest column. And it looks like Isiah’s trying to hire his former college roommate.

• Shaq is turning into Donald Trump. Except I suppose Trump doesn’t always lift people into the air and hold them like babies for photo ops.

• Raymond Felton says the BETcats will make the Playoffs, which would be a bigger story if hadn’t predicted the exact same thing last season.

• Really interesting interview with Pat Williams, who says when he was Sixers GM they planned to draft a high school player every year for five years.

• Rick Carlisle is cashing in.