Madison Square Garden Is Out Of Control 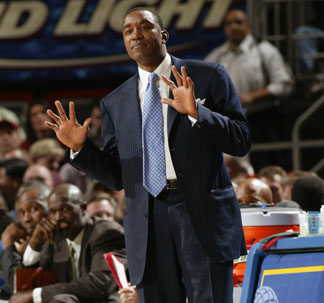 He said. She said. Anytime you hear this phrase uttered in relation to pretty much anything, it’s a negative. When the context of the phrase is related to a sexual harassment charge then it’s worse than negative, it’s tragic. Oftentimes even disgusting once the sordid details begin to emerge. So when the wattage of despicability is increased by involving the president of the NY Knicks and a former Madison Square Garden employee, well, what you have is a scandal of titanic proportions. Right? I mean it sure seems that way here in NY. Everyday for the last few weeks information and allegations have come out about Isiah Thomas and Anucha Browne Sanders and its been all downhill.

I’d been doing my best to avoid this whole thing. I didn’t want to know about it until last week when the big deal was Isiah’s explanation about the word bitch. Explaining his stance by saying “I do make a distinction. A white male calling a black female a bitch is highly offensive. That would have violated my code of conduct Maybe I shouldn’t go there. … A white male calling a black female, that is wrong with me. I’m not taking that. I’m not accepting that. … That’s a problem for me.”

When I first heard about it I figured he must have been misquoted somehow. Nobody with any intelligence would apply such a double standard would they? Wow, what the hell was he thinking? Is it not obvious that this is wrong? It’s just as disrespectful regardless of who says it. His level of ignorance is Bill O’Reillyesque (btw, I live in Harlem and while its absolutely absurd what O’Reilly said I’m not offended at all. This is what he does; to me he’s a no doubt, hardcore racist. But at least he doesn’t try to hide it. It’s best to know your enemies) What kind of backward double-standard is this. The slope is just too slippery to be justifiable. The way I was raised you call a black woman a bitch, you better be prepared to bob and weave. For those out there who never dated a sister let me school you. They don’t play around with that. To make matters worse, testimony from Knicks guard Stephon Marbury saying that yes he called Sanders a bitch but not a “black bitch” came out next. Like somehow that makes it better. Again wow.

And then word came out that Brown-Sanders was trying to pressure her subordinates to testify against Isiah and other MSG executives, which is also very shady. And then today the aftermath of Zeke’s latest testimony when the defense tried to paint Isiah as a clean-cut semi-momma’s boy. This stuff is getting crazier by the hour.

The suit ALLEGES that she was fired from her position of VP of Marketing because she didn’t appreciate Isiah’s language and refused his sexual advances. MSG claims she resigned because she knew she sucked at her job and that when she tried to coerce her co-workers to speak on behalf of her lawsuit (which is almost like tampering) it was then when she was fired. What’s weird is that Browne-Sanders isn’t just suing for money, she also wants her old job back. Something that seems to fly in the face of her case, because if a working environment is so toxic that she has to go through all of this—then why go back? I’ll skip over the seedy stuff about the Garden employee who slept with Steph and his cousin. You can read about that in Sam’s blog.

I have no idea if Anucha Browne Sanders is lying or if Isiah Thomas is lying but I find myself both bored and fascinated by this whole ordeal. Let me explain.

I’m bored because I’m tired of sports being about everything else but sports. The Patriots cheating scandal, the rampant steroid allegations, Mike Vick and his dog-fighting scandal (did I just hear that he failed a drug test? He’s got to be one of the dumbest guys ever), the NBA referee point-shaving situation and now the coach and president of an NBA team knee deep in a sexual harassment suit. I mean damn. I know BS like this is akin to celebrity scandals and that people are into this destructive behavior but I’m good on this stuff. I’m getting tired of hearing about this. Growing up sports was an escape from depressing news and even now, even though I work in sports journalism, I still rely on athletics to give me a dose of escapism. But lately sports are flooding my life with frustration. When I hear people complain about athletes these days I don’t try to sway them. I try to not agree and everyday it gets a little harder.

The fascination comes from trying to figure out how in this day and age sexual harassment even happens. Again I don’t know if Browne Sanders is being truthful or not. Initially when I hear about harassment I assume that the woman has been victimized, if only because I can’t imagine someone going through the trouble of making something this significant up. You’d have to be crazy to do that. But after learning more about the case I have my doubts about her story. The problem is, I can’t entirely put what Isiah has been accused of past him. I mean you never know.

I will say this though, I will never be accused of that. Well, knock on wood I won’t. What I mean is that I never will harass anyone for anything like this. My ego won’t let me, that sh*t is almost like a perverse way of begging.