The Arena Has Gone Dark

The pro basketball taking place in Madison Square Garden these days is a tragedy. 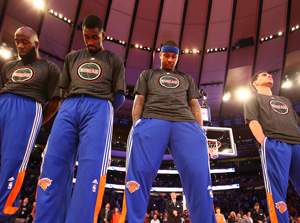 There’s an old maxim from Bill Parcells that once you win a championship, you share blood with your teammates. The 2014-15 Knicks will be bonded in a similarly intimate fashion, except it’s less blood that they share and more like herpes. If nothing else, it will bind them forever and it’s an experience they will never forget.

As of this moment, one of the glamour teams of the NBA is 10-43 and suffering a five-game losing streak. The Philadelphia 76ers, a team that is loudly and proudly trying to lose, has a better record.

This franchise run by the sport’s worst owner, James Dolan, is not an NBA team. It’s a disgrace. The last two seasons, they have been a reenactment of Kafka Metamorphosis, a piece of performance art showcasing what it would look like if an NBA team turned into a cockroach. That’s actually insulting to cockroaches, who don’t die as easily as this team has.

Hard as it may be to recall, this is a team that finished 2013 with 54 wins, an Atlantic Division title and a second-round Playoff loss to the Pacers. Last season, plagued by injuries and impatience, they won what was seen as a disastrous 37 games. The almighty Phil Jackson was hired as team president, Coach Mike Woodson was thrown overboard and the coaching job was offered to Steve Kerr. Wisely, Kerr took the job in Golden State. Now it’s just a team in hell.

Keep in mind that the 2013 Knicks were not in the class of the Pacers or the eventual Eastern champions from Miami. But things change quickly in this league. LeBron went home. Paul George was injured, and Lance Stephenson imploded. Imagine if the Knicks had chosen to retool this team around Carmelo Anthony and Tyson Chandler instead of tearing it down. We don’t have to imagine it. We can look at the Hawks, Bulls, Raptors and Wizards, all teams that chose continuity, with clever additions, over an overhaul and all delivering a thrilling, winning brand of basketball. Or look at the Mavs and see how terrific a team can be when they choose to retool with the right coach.

The implications of awful basketball in New York City are profound. We could be seeing the unraveling of the legend of Phil Jackson, the coaching career of Derek Fisher—over before it starts—and the final death knell of the narrative that sees Carmelo Anthony as a tier-one superstar. Jackson has asked for the blame to fall on his shoulders, making what he described to the New York Post as “a mea culpa.” He went on to say, “I take responsibility for it, and the fans, I want them to leave Derek [Fisher] alone. It’s not his fault. Obviously I didn’t do the right thing in picking the group of guys that were here.”

Jackson should get credit for effectively admitting what many have suspected for quite some time: that helming rosters led by Jordan, Pippen, Shaq and Kobe will make many look like geniuses. In other words, it would have been profoundly more annoying if Jackson was just smirking and saying some peyote-infused claptrap about how this was all part of a master plan whispered to him in the South Dakota Black Hills.

But even more distressing than the sight of the Knicks in this ditch appears to be Jackson’s plans for getting them out. He is banking on the team’s expected $30 million in salary space along with the ping pong balls lining up correctly for this year’s Draft. The flaws of this thinking should be obvious to anyone who has been watching the NBA over the last 10 years.

Done are the days when simply the allure of New York City or Los Angeles would be enough to lure free agents. If you are a budding superstar looking for a max deal, is Carmelo someone you want to build the prime of your career with? To ask that question is, unfortunately, to answer it. As for the Draft, the idea of a teenager being able to immediately turn around your team happens about once a decade. Not even the Cavs made the Playoffs when LeBron was a rookie. That once-a-decade player might be out there right now, but, with all respect to Jahlil Okafor, he won’t be in this summer’s Draft.

The 2015 All-Star Game at Madison Square Garden was a great time for the New York City faithful, if for no other reason than the fact that it was an opportunity to watch some basketball, which tops whatever game James Dolan and Phil Jackson are playing these days.