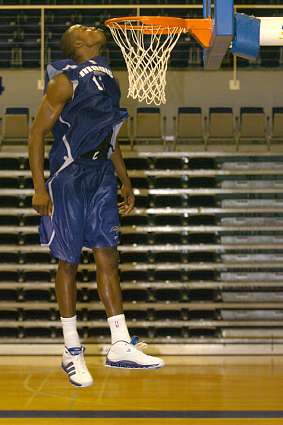 Today, Todd Sikorski from Believing in Magic helps us preview his team, the Orlando Magic.

SLAM: A lot of people are excited about this team and its potential. Are they justified in feeling this way?

TS: Yes, it’s hard to believe but Orlando is the hip pick to make the NBA Playoffs this year. Orlando hasn’t been this hip since before Disney made the town Theme Park Central. The reason for the optimism? The Magic finished off last season winning 16 out of their last 22 games.

Is the optimism justified? Yes and no. First off, the Magic are a different team at the beginning of this season than they were at the start of last season. Gone are veterans like Steve Francis, Kelvin Cato and DeShawn Stevenson. In their place are youngsters like Jameer Nelson, Darko Milicic, and rookie J.J. Redick. The emphasis on youth worked well at the end of the season especially with star-in-the making Dwight Howard stepping up his game a notch. However, making the playoffs isn’t a given. The Magic are a young team
with plenty of potential. Despite their late season success, it still might take them a while to gel especially considering the questions about the health of veteran Grant Hill and Redick.

Dwight Howard is obviously a beast. How close is he to becoming a great player in this League?

No doubt about it but Howard is the one player the Magic can’t afford to lose. He is their future. His solid work at this year’s World Championships further emphasized that. One has to remember, however, the big man is still young and green. This is only his third year in the NBA, after coming right out of high school. Sure, his game is better than anyone has expected so far, particularly on the defensive end. Right now, Howard is one of the premier rebounders in the league and his defense is strong. Offensively is where Howard needs the most work. He did lead the Magic in scoring last year at 15.8ppg but his shooting range is limited. Once he develops a more varied shooting touch, which he will, in the next few years, Howard will be one the greats.

Over the past couple of years, injuries have decimated Grant Hill so much that it seems the only time someone saw him was when he was guest hosting on some breakfast show. Last year saw Hill playing in only 20 games due to various injuries. Supposedly, Hill is recovered and ready to play at least 20 minutes a night this year. Whether the Magic even need Hill is a debatable issue. Some say no because Hedo Turkoglu sparkled in his place last year. However, Hill’s leadership is something the young Magic need. Not to mention his offense. In those 20 games last year, Hill still averaged over 15 points a game, which ranked him second on the team.

How do you see Darko fitting in with this team? What kind of future does he have in the NBA?

One of the brightest spots of last year was seeing Darko Milicic play alongside Dwight Howard. Milicic, who arrived in a mid-season trade with the Pistons, played well in coming off the bench. His performance was a surprise because many thought Milicic was a bust. The thing is Milicic just needed a chance to showcase his talents, something he couldn’t do in Detroit. As for what kind of long-term success Darko will have, it is too early to tell. If he stays with a team patient enough to see him continue to develop, like the Magic, he should have a solid future in the league. If not, things will be tough for him. Just like in Detroit.

Alright, enough foreplay, how will the Magic fare this season?

Bottom line time. The key to the Magic’s success this season will be two-fold. First off, the strong development of the younger players like Jameer Nelson, Dwight Howard, and Milicic has to continue. Luckily for the Magic, there is no reason to think they won’t either. Especially with Coach Brian Hill leading the way. He’s great with young talent. Most important, however, will be the injury situation. If the Magic roster is decimated with injuries, this could be a disappointing season in Orlando. Of special concern is the Magic’s frontcourt. If Grant Hill doesn’t come back strong, veteran Hedo Turkoglu will probably be the Magic’s most important player. The Magic need his offense. They can’t expect Howard to score 25 points every night. Not yet. Still, there is no reason to think the Magic can’t sneak into the playoffs and that is exactly what will happen. Not only that but don’t be surprised if the Magic upset a team or two in the playoffs either.