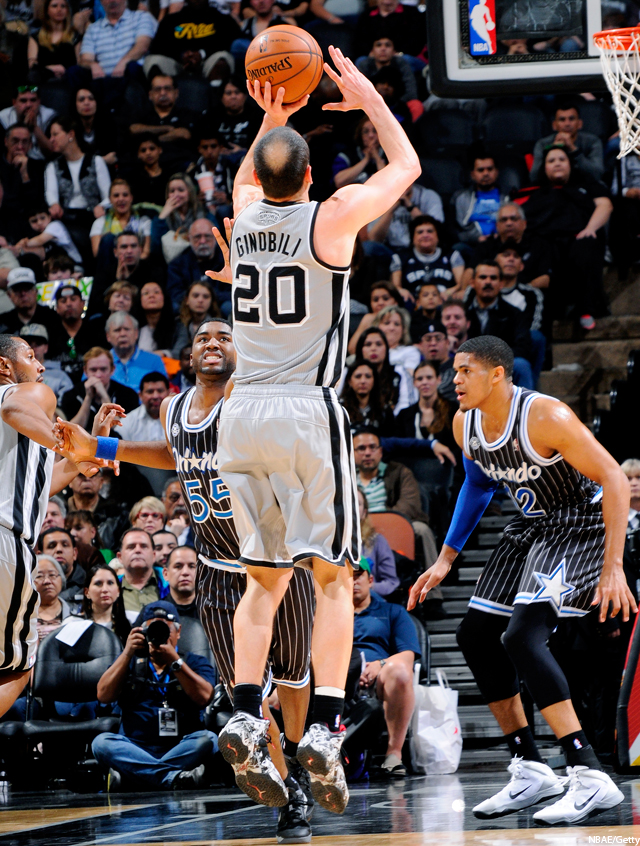 I love this guy, and it’s hard even to count the ways. My “manu-crush” on Manu Ginobili has been growing through the years, blossoming like the Spurs shooting guard’s ever-expanding bald spot.

First off, I like that he is from Argentina, a country better known for Diego Maradona and the tango than basketball. Ginobili pretty much put the place on the map, hoops-wise, when he led Argentina to the Gold medal at the 2004 Athens Olympics. Along the way, he and his pals disposed of a US team featuring young Dwyane Wade, LeBron James and Carmelo Anthony, 89-81. Oops. Manu dropped 29, 3 and 3, plus a steal on the Americans’ heads.

I liked him because he is left-handed, and southpaws are fun. Every time I see him make a crazy banker for the Spurs with his left hand, I have to remind myself that he’s doing what’s natural. Then, too, I liked him because I was at those Athens Games, and I wanted to talk to Andres Nocioni, his teammate, and tell him the Chicago Bulls, for whom he had yet to play, had just penciled him in as a starting forward. Trouble was, Nocioni spoke almost no English, so Ginobili graciously helped out. In that talk session, Manu became the first person to explain that Noach, as we in Chi-Town would find out soon enough, was a wild man on court.

My like bloomed into love when the 6-6 Ginobili made two All-Star Games, earned the NBA Sixth Man of the Year and played a key role in three of the Spurs’ NBA Championships. That he has only been a Spur for his 12 NBA seasons is sweet, too. But the deed that placed him deep in my heart was his knocking a bat out of midair at the Alamo Dome in ’09, raising his right hand in triumph as he walked the creature off the floor and gave it to a maintenance man.

Then there’s the cherry on top, as it were. I love that Ginobili, who turns 37 this summer, has male-pattern baldness, so that with his pale skin and black circle of hair, he appears to be wearing a flesh-toned yarmulke. He could shave, but he doesn’t. He reminds me of Bobby Weiss, when he was a player, or Friar Tuck. He’s so old school, it makes me weep. My bald spot loves your bald spot, bro.