Gasol is hoping to keep the Grizzlies a contender in the West. 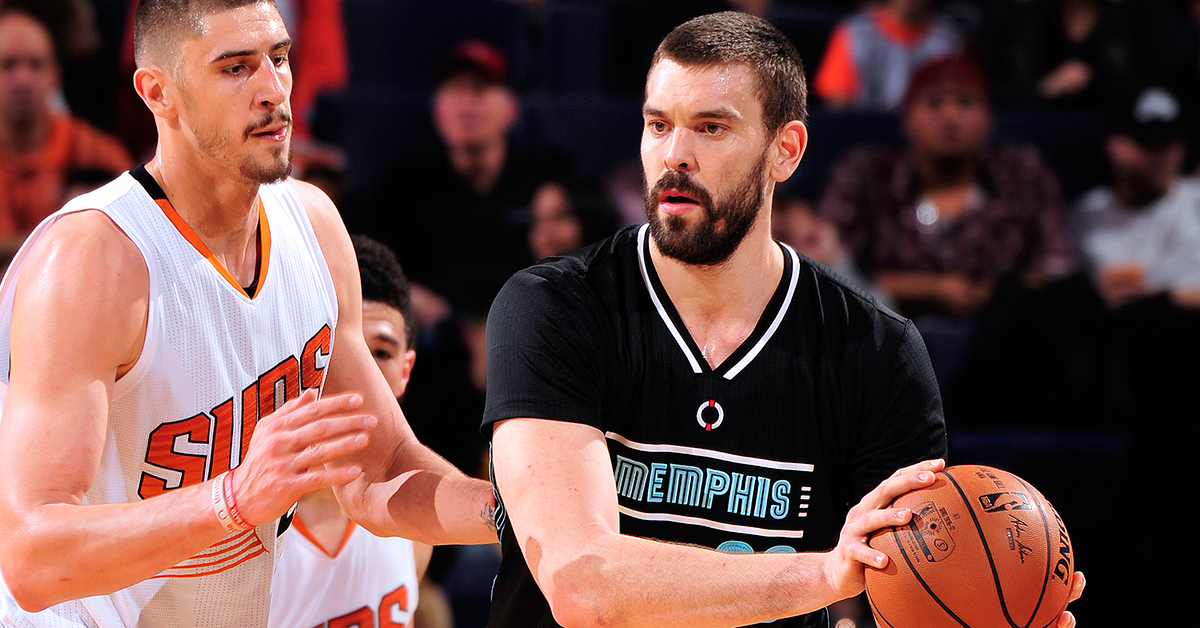 Marc Gasol finds himself at a bit of a crossroads in Memphis…albeit through no fault of his own. The Spaniard, who is heading into his tenth year, took his game to new heights in 2016-17, scoring a career-high 19.5 PPG while dishing out 4.6 dimes—and there’s every reason to think he could replicate or surpass those totals this season. Gasol remains the linchpin of Memphis’ attack, igniting the team’s offense with pick-and-roll partner Mike Conley.

And yet, it’s become more difficult now than ever to envision Gasol reaching the NBA Finals with Memphis. A postseason mainstay, the Grizzlies have been to the playoffs in seven straight seasons—reaching the Western Conference Finals just once in that span. After getting bounced by the Spurs in the first round for a second straight year, one would have expected GM Chris Wallace to provide his Gasol/Conley tandem with a stronger supporting cast.

Instead, the team let Tony Allen, Vince Carter, and Zach Randolph walk in free agency. Due in large part to Conley and Gasol’s lofty salaries, the Grizzlies have only come away with Tyreke Evans and Ben McLemore as complementary pieces over the offseason. With the preseason fast approaching, Gasol will enter his age-32 season without the assurance of an improved roster or a postseason spot. ESPN’s RPM projection system tabbed the Grizzlies for 34 wins; a jarring prediction for a team that hasn’t finished below .500 since 2009.

Though uncertain to bring Memphis to the next level, Gasol’s slide from No. 28-to-35 on the #SLAMTop50 wasn’t borne of declining production. Not only did Gasol reach career-highs in several offensive categories, he completely revamped his arsenal by shooting 38.8 percent on 268 attempts from beyond-the-arc. Gasol’s transformation into a 3-point threat is remarkable, even considering the big man’s smooth touch from the perimeter (Marc is a lifetime 42.7 percent shooter on 10-16 foot jumpers). The former DPOY hauled in a career-low 6.3 boards last season, which may be emblematic of the big man’s transition to a floor general. What’s more, Gasol looked to have recovered from a fractured foot last season, staying on the court for 74 games after an injury-plagued 2015-16 campaign. Statistically speaking, there’s no reason to think “Spanish McGregor” won’t have another monster season.

While still under contract for another two seasons- plus a player option- Memphis’ front office is on borrowed time to build a winning model around Gasol. The three-time All-Star has openly discussed his frustrations with the team’s offseason, going on record as saying he may “have to revisit things” if the franchise continues to stagnate. A consensus top-10 big man in the League, Gasol would have no shortage of suitors if placed on the trading block.

Once merely a throw-in in the deal sending his brother to the Lakers, Marc’s game has blossomed over the past decade, receiving the #SLAMTop50 nod for seven years running. With continued across-the-board production, Gasol could reprise his role in the Top 50 for years to come. What’s less certain is whether those years will come with the Grizzlies.