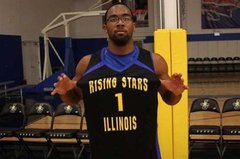 Eleven days ago, Michael Jordan’s son, Marcus, took to the Twitter machine to brag about the amount of money him and his friends blew at a Las Vegas casino. He boasted about going through something like $50,000 in a single day.

There’s just one problem: Marcus Jordan is 19 years old, and the ensuing investigation is news because of who his father is.

People under 21 often try to gamble or drink in Las Vegas, but punishment for casino operators depend on the circumstances, Markling said. Jordan’s 19-year-old son Marcus Jordan tweeted Aug. 20 about spending $35,000 at Haze at Aria Resort & Casino. “Last night was stupid… 35K at Haze,” the University of Central Florida sophomore guard said. “Totals 50K something the whole day.” The tweet has since been removed from the site.

Jordan told a Fox Sports website last week that the tweet was a mistake and said he had conversations with both his parents about it. “I didn’t mean it the way it came across,” he said. “My family and friends know the type of person I am.”

Little more than a small slap on the wrist for the casino — if that — is expected to come of this. As for Marcus Jordan, his school has so far refused to comment.