Mario Chalmers Is $20K Poorer, But Not Suspended 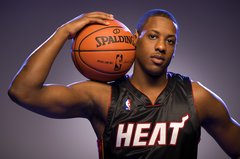 Mario Chalmers’s wallet just got a little bit lighter, and he’ll have to alter his plans for next summer.

The NBA has fined the Heat’s rookie guard $20,000, but he won’t miss any action on the court. The Sun-Sentinel has more:

The Heat has been informed by the NBA that point guard Mario Chalmers will not be suspended for his role in the incident that led to last week’s expulsion from the Rookie Transition Program.

Although a suspension initially was a concern, Chalmers’ penalty will be a $20,000 fine, as well as the requirement he repeat the program next year.

No word yet on the fate of Chalmers’s partner in crime, former Jayhawk teammate Darrell Arthur.

My guess is that League officials are still doubled over in laughter following Arthur’s claim that – despite a strong scent of the drug, and the sound of someone furiously flushing the toilet when security paid a visit to the hotel room – he did not inhale.