Mark Jackson: On the Radar in Phoenix? 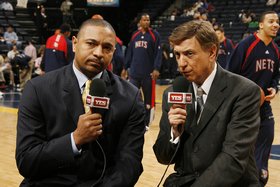 Still feeling the sting from losing out on the job he so coveted, Mark Jackson could find himself stalking another high-profile sideline in the not-too-distant future. Irony of ironies, he could end up replacing the man who took his dream gig.

There’s talk that Mark Jackson is set to interview with the coachless Suns, and Jackson wouldn’t mind the job one bit.

NBA sources said that longtime NBA point guard and ABC broadcaster Mark Jackson, who confirmed his interest in the job, will get one of the first interviews with Suns general manager Steve Kerr when that process starts next week.

“It’s a great job. That team is ready to win right now,” Jackson told the Tribune Monday. “It’s very intriguing. Anyone who got that job would consider himself lucky.”

Despite the lack of coaching experience, Jackson could actually be a pretty good fit in Phoenix. He’s respected and well-liked seemingly by everyone, and he doesn’t strike me as the kind of guy who would scoff at the idea of playing defense once in a while.