Top-10 pick Marquese Chriss is definitely new to this high-level basketball thing. Which is all the more reason his ascension has been—and will continue to be—fun to watch. 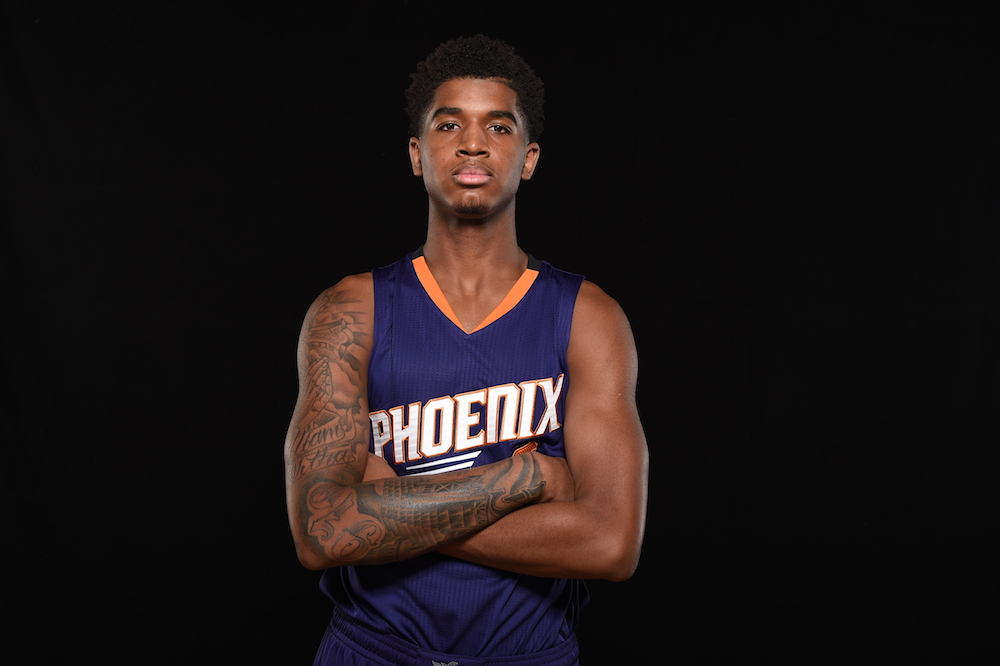 As he sits down to do his first-ever (as in, dude was never even in PUNKS) interview with SLAM, 18-year-old Marquese Chriss (he turned 19 on July 2) kicks things off by asking questions. Polite ones. Inquisitive ones. “Where y’all based?” “Do you travel a lot?” “Interview a lot of people?” “How do you like it?” Etc etc.

It’s a line of questioning I’m used to…from high school kids interested in journalism careers. Not from a dude who was days away from being selected in the Lottery by the Phoenix Suns.

Most young prospects these days are as media-savvy as political candidates, often from age 15 or 16 and up. That’s what happens when the ESPNs, Scouts and, well, SLAMs of the world are watching you develop and play and sticking phones in your face all the time. Chriss is a different case. A “late-bloomer,” as they say.

“I first started playing organized basketball when I was 14,” says the 6-10, 233-pound (numbers that can still grow!) Chriss, who hails from Sacramento. “I always played football so basketball kind of came later for me. I would play for fun, like, at the park, but I never took it serious until my sophomore year of high school.”

Obviously, in this day and age, that is awfully late. Many American kids pick a sport to “specialize” in by age 12. European players with promise are typically in pro-style academies by 14.

Marquese Chriss was playing his first game at that age.

“At first I was still kind of playing for fun because I couldn’t play football anymore. And then I got moved up to varsity during my sophomore year and it kind of became more real.”

The realness only grew from there. Playing at Pleasant Grove High, Chriss learned to harness his athleticism and became well-known enough that Pac-12 schools showed interest. As he played the game more, he also watched more, too, which was pretty easy in a one-sport town that loves its hometown Kings. “I went to a lot of Kings games with my friends but I decided not to have a favorite team,” remembers Chriss, who ultimately committed to the University of Washington with little fanfare. “I did have a favorite player, though—Rudy Gay. He’s interesting to watch and I enjoyed watching his highlights and things like that.”

Following high school, Chriss migrated north, where Lorenzo Romar’s Huskies haven’t always had the best win-loss record, but talent keeps cultivating. Chriss was considered a project even on the college level, and there were certainly games when his inexperience showed, but on balance, Chriss’ freshman year was a resounding success. Playing alongside freshman PG Dejounte Murray (scooped up late in the first round by the Spurs), Chriss averaged 13.8 ppg, 5.4 rpg, 1.6 bpg and 0.9 spg in just 25 minutes a night, hitting 53 percent of his shots from the field.

“You look at him, and he is immensely talented,” Romar told Arizona Sports 98.7 FM after the Draft. “He’s so athletic. He can step outside to shoot the basketball. He plays with a lot of fluidity. One day in practice he took off with two feet right in front of the free-throw line. One of our players was trying to take a charge and he just made a wicked, wicked dunk on him. He made some eye-opening plays.”

The Huskies went just 19-15, but Chriss showed so much potential that he was quickly faced with a decision even he had not expected so soon. “When I went to college, I didn’t think I was going to leave after one year. It was [going to be] more like a development thing,” he says. “However, it happened quicker.”

No kidding. And once Chriss threw his name in the proverbial Draft ring, his rep only got bigger. “I think my stock rose because people have gotten a chance to see me,” he says. “I think playing in the Pac-12, we didn’t get as much publicity. I just think I have a better opportunity now that I’m kind of in my own light.”

For sure, as we witness after the interview, Chriss looks good in workouts. Even in an age of face-up forwards who can do a little of everything, it’s still unusual to see a well-built 6-10 dude flick threes one second and explode to the rim for a showy jam the next.

Draft night arrives a few weeks after we sit down with Marquese, and his ascension continues to the point that there’s rumors he’ll go as high as No. 3. He ends up being selected on behalf of the Phoenix Suns at No. 8. If there are any concerns about his maturity (shit, maybe being a polite kid who hasn’t been jaded by the underbelly of “amateur” hoops in this country is a positive, anyway), they are more than outweighed by the excitement of what a kid like this can turn into once he’s spent more than four years really playing the game. (Out in Las Vegas forSummer League, MC posted averages of 10 points and 9 rebounds per game for the Suns.)

And Chriss will be excited, too. “It’s gonna feel surreal playing in the NBA. It’s going to be different, people are going to be looking at you that way. Like younger kids are thinking of you how you thought of other people and it’s going to be a cool experience.”

You can bet some of those kids will have questions for him, and it says here that Chriss will answer them with a smile.