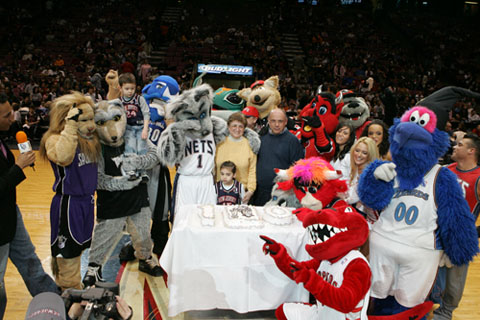 Generally speaking, I’m a pretty serious basketball fan. Meaning, when I attend a game in person, I watch intently, studying the players and the coaches as though I were in class (actually, it’s probably with more intent then when I was in class, since the latter often found me asleep). My seriousness means that when it comes to most of the in-arena distractions found at NBA games, I can be as opposed to them as the most crotchety old timer; I dislike the music played when the game is in play, I hate the t-shirt toss and I despise (though possibly not as much as Russ) ThunderStix.

However, as my co-workers know, my negativity goes out the window when mascots are involved. I bring this up because Sunday night at the Meadowlands the Nets celebrated the “birthday” of their mascot, Sly. I couldn’t attend the game (though I will be in the house tonight when the Nets host the resurgent Nuggets and SLAM cover subject Allen Iverson), but I was there in spirit, and even had the Nets send me this photo of the festivities. To be honest, Sly is actually one of the lamer mascots; mainly because it’s unclear what a fox has to do with the swamp-inhabiting Nets. Not that Duncan was much better, though I did get the latter’s autograph when I was 10. For another, his in-game bits rarely entertain. But Sunday night, Sly did the best thing possible: he recruited other mascots to join in the fun.

As far as I’m concerned, the multiple mascots in one setting is a can’t miss. As a student at GW, our mascot, George, bored the s–t out of me. But when, once a season or so, he brought along mascots from Georgetown, George Mason, the Orioles, the Wizards, Maryland, etc, hilarity usually ensued. Especially for those following Scot Pollard’s advice.

This Sly party also reminded me of the Brooklyn Cyclone game I attended in 2001 when Cyclone mascot Sandy the Seagull brought along his pals, Clammy Sosa and Shark McGwire. Check out this site for more on Shark and Clammy (and their friends such as Deion Salamanders and LeBroco James.)

While Sly is a mediocre mascot (definition: a person, animal, or thing that is believed to bring good luck, usually one that becomes the symbol of a particular group, especially a team) the NBA does have a few good ones. MavsMan—the most athletic and best dunking mascot—is solid, as is the classic Phoenix Suns gorilla. I also like Benny the Bull, though the Chicago PD may not agree.

College hoops has some great ones, too. The Stanford Tree, which is prone to mischief always makes me chuckle. It also reminds me of a bet I won as an elementary school student, when a friend’s father refused to believe me that Stanford’s nickname was the Cardinal, not the Cardinals. We called the school to check and I won a crisp $20 bill. Obviously a color can’t be a logo, so Stanford rolls with the Tree. Works for me. The St. Joe’s Hawk, which famously flaps it’s “wings” for the duration of every single game, is another standout in the field. Staying in the City of Brotherly Love, the Phillie Phanatic is probably baseball’s best mascot.

Ironically, most of my mascot observing is done from afar. Check out the venues I most frequently attend sporting events: Yankee Stadium for baseball, Madison Square Garden for basketball and Giants Stadium for football. Tradition-steeped as they are, neither the Yankees, Knicks or Giants employ a mascot (nor does my favorite sports franchise, the Los Angeles Dodgers, who I see in L.A. whenever possible). None of the above absences bother me in the least bit, so I guess I’m not proposing that everyone have a mascot. But I am admitting that when I see a good mascot on TV or at a game of a less traditional franchise, they do put a smile on my otherwise serious face.

Lang (a mascot fan in his own right, if not as serious as me) and I once heard about a mascot convention in Las Vegas and we were going to try and go to write about it for SLAM. Sitting in the Editor-in-Chief’s chair like I do now, I realize that was an absurd idea and I know why my predecessors Russ or Ryan had zero interest in that idea. How can we give precious magazine pages to mascots? But my weekly online column that takes up nothing but cyberspace? This thing was made for mascots…