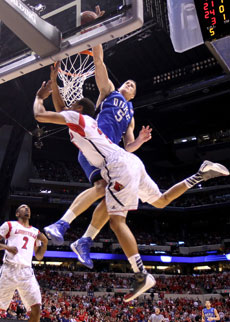 As a New Yorker and a Knicks fan, I’d prefer for the Celtics to draft this guy. But with those chances being slim, we’ll have to find a more suitable draft prospect to rock the Irish green. Honestly, this pick was harder than I initially thought it’d be. Is Doc Rivers even returning? What about Paul Pierce? Kevin  Garnett? Ultimately, the answer to those questions will help provide an answer to which position they should draft. And although I am the Celtics’ General Manager—well, just for the remainder of this piece—only Danny Ainge can answer those questions. Then again, word is even he has no idea.

I figured that by looking up the players Boston has been working out, we’d get a better sense of what position they’re interested in filling. So, as of Tuesday, here’s what the Celtics’ pre-Draft workout list looked like (more or less):

Clearly, point guard and center are the two positions the Celtics are paying the closest attention to, hinting that they’re most likely to draft someone within those two spots.

Just last week, rumors surfaced throughout the web that PG Dennis Schroeder had received a first-round guarantee from the Celtics. Both sides have since denied the reports. The Celtics’ interest in a point guard is understandable. Ever since Rajon Rondo went down with his ACL injury last season, the team was very vulnerable at the 1-guard position. Questions emerged as to whether Avery Bradley is the quality backup point guard the Celtics need moving forward. In their first-round Playoff series against the Knicks, Boston averaged more turnovers than assists (17.3 turnovers, 16.8 assists). But if what Ainge recently said holds true, then Rondo “should be ready by training camp.” Furthermore, the major problem for the Cs wasn’t at the point—although it will behoove the team to find a legitimate second-option very soon—the problem was in the paint.

Boston averaged 39.3 rebounds per game last season, which was good enough for second-to-last in the entire NBA. The Celtics did rank last in the entire League in rebounding differential (-4.3). They also ranked last in offensive rebounds per game. And all that was with KG playing and producing some decent numbers for a hobbling veteran. If he does indeed end up retiring, it won’t get any better for them. And even if he does decide to return, his presence clearly hasn’t been enough to get them out of last place in most rebounding categories.

The Celtics went with two bigs in last year’s first round of the Draft in Jarred Sullinger and Fab Melo. Combined, the two averaged 6.4 rebounds. That evidently didn’t work out too well for them—although Sullinger did begin to show improvement on the glass in January, grabbing 15 and 16 rebounds in two games, before having his debut season cut short due to a back injury.

Boston’s inability to score in the paint was also a problem. Aside from KG and Brandon Bass, the Cs struggled to score points on the post. A former Celtic and possible option, Al Jefferson, will be a free agent this summer, but it probably won’t matter unless Boston can find a way to clear up some salary space. Speaking of former Celtics, what was the reason why the Celtics traded Kendrick Perkins, again? Because they could really use him nowadays.

So, with all that being said…

With the 15 pick in the 2013 SLAMonline Mock Draft, the Boston Celtics select…

So do I seriously think that Plumlee will fix all of Boston’s problems in the paint? Definitely not. But it’s a start. At 6-10, 245 pounds, his build and size, along with his impressive athletic abilities for someone his size, will provide the team with a much needed boost in the paint. Having averaged 17 points and 10 rebounds last season as a senior, and even considered a National POY candidate, the Warsaw, IN, native demonstrated his prowess around the glass. He possesses a great basketball IQ and managed to average a double-double in the ACC despite not having a highly developed skill set yet.

Although he’s drawn some comparisons to Tyler Hansbrough (yes, I know saying something like this is blasphemy to many Duke fans out there), that might not be a bad thing at all. Well, yes, Hansbrough did make a few guest appearances in Shaqtin’ A Fool throughout the season, but aside from being caught slipping every now and then, he’s provided the Pacers with the intensity and effort that the team has become known for—the same immeasurable intangibles that Plumlee provides. It is his hustle and energy that made Plumlee a fan-favorite at Cameron Indoor Stadium.

Plumlee is a very good rebounder who can also be a pest on the defensive end for many opponents. He runs the floor well in transition and forces opposing bigs to race up the floor to defend. He’s also very efficient on the offensive side with his shot selection, having made just about 60 percent of his attempted field goals during his senior year.

If the Celtics are looking to find a player whose immediate impact will reflect in the standings or in the aforementioned team rebounding categories, they most likely won’t find it in this Draft, not with the 16th pick at least. The front office will have to get creative and put together some compelling trade offers in order for any of those to happen. At the very least, this mid-first round pick could give them some aid in the paint, which they’ve been in desperate need of for the last couple of years. At this point, any help in the interior should be welcomed.