Talking indie rock music, his home state, and Rock On Foundation with the NBA champ. 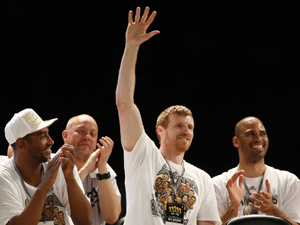 It has become an annual summertime tradition in New Hampshire: the Matt Bonner concert. Two time NBA Champion, Matt Bonner, and his brother, Luke, have been putting on an annual indie rock concert in their home state of New Hampshire for the past seven years. The concert is appropriately titled Sneakers and Speakers and has the main aim of bringing indie bands that may not ever play in New Hampshire to come and perform in the state, with all of the funds going towards the Bonners’ charity, Rock On Foundation.

This past Saturday’s Sneakers and Speakers concert at the picturesque Redhook Brewery in Portsmouth drew a capacity crowd, as close to a thousand came to hear The Whigs, Kevin Devine & the Goddamn Band and New Hampshire’s own Okkervil River. But with the San Antonio Spurs winning the 2014 NBA Finals, the crowd was also there to celebrate with Bonner and the Larry O’Brien trophy, which was making a stop in New Hampshire as part of the Spurs Trophy Tour.

The day before, Bonner had taken the trophy around his hometown of Concord, as the trophy visited his basketball camp, his high school and even the state’s capitol building. From the Spurs Trophy Tour Blog:

“Other spots on the city tour hosted by the Red Rocket included a trip to the Boys Club (where Matt said he hung out a lot playing games, other than basketball) and the New Hampshire State House. Possibly the coolest spot of the day was when we pulled up to Concord High School, where Matt guided his team to three state championships (Matt quickly barked it should have been four). Upon entering the gym, Matt’s No. 15 jersey hung near the ceiling, ensuring it was the first thing you noticed walking in. Also in the entrance was a trophy case and display of all of Matt’s accomplishments while in high school that was labeled “An Athlete and a Scholar.” Matt quickly placed the Larry O’Brien trophy next to the case for photos. He then took pictures in the gym where he made his mark from grades 9-12.”

The trophy being in New Hampshire was such a momentous occasion that New Hampshire’s Governor Maggie Hassan came and congratulated Bonner at the concert. She even issued an official proclamation naming July 12, 2014, Rock On Foundation Day. The proclamation includes this fun and official statement:

“WHEREAS, Matt Bonner has brought the Larry O’Brien Trophy to the event today to celebrate his San Antonio Spurs winning the NBA Championship, Matt’s second title in his 10 year career.”

With the trophy up on stage during the performances by the Whigs, Kevin Devine & the Goddamn Band and Okkervill River, SLAM was able to chat with Bonner during the concert to learn about the Spurs Trophy Tour in his home state:

SLAM: This is the first U.S. stop (the other being New York with Danny Green) for the Spurs Trophy Tour. Did you have to help sort out any of the logistics of bringing it to New Hampshire?

Matt Bonner: Luckily, I didn’t have to take care of any of the logistics. I just told them I would like it on these dates and the Spurs took care of it. One of their PR professionals, Mitch, is here and he has taken it all around the world. Luckily, New Hampshire is one of the stops.

SLAM: How does it feel to bring the trophy to New Hampshire and celebrate with everyone here?

MB: It really means a lot. I have a lot of pride being from here. Making it to the NBA, a state, really an area of the country, New Hampshire, Maine, Vermont, that hasn’t really sent anyone to the NBA. To be able to bring it here, to all of the people that have supported me my whole career, really brings everything full circle. It is great to be able to celebrate with them.

SLAM: I saw some pictures and it looks like you were also able to bring the trophy to your basketball camp, which takes place at your old middle school. I’m guessing the kids went a little crazy when they saw it.

MB: Yeah, it was great. We have four different groups at camp based on age. We had high school, NCAA, D-League and NBA. We were announcing the champions from these age groups one by one. We saved the NBA for last, turned on “We are the Champions” and brought out the trophy as a surprise. Everyone went nuts and it was fun to see.

SLAM: Governor Maggie Hassan just proclaimed today, Rock On Foundation Day. What are your thoughts about this pretty amazing honor?

MB: Again, just pride. I’m glad it is Rock On Foundation Day. It is not about me. It is about the community and the programs we support and the kids we help.

SLAM: This is the second year that Sneakers and Speakers has been at the Redhook Brewery, I know in the past you have had the event at different cities around the state. Is this location going to be the official one?

MB: Yeah, I hope so. We’ve developed a good relationship with Redhook. A lot of what they stand for aligns with Rock On’s mission, with the promotion of the arts and the community. Hopefully it can be a long-term relationship.

(Sidenote: Working with Luke Bonner’s hard cider brewing expertise, Redhook Brewery created Rock On Saison, a “Belgian Saison, brewed with Orange Peel, Lemon Peel and Coriander. Fermented with a French Saison yeast strain.” The beer can be found at select bars in New Hampshire, and all of the funds from sales of the beer will go towards Rock On.)

SLAM: Before coming to celebrate with New Hampshire, you and the Spurs got to celebrate in San Antonio with the river parade. I noticed that your infant son was rocking a tie. Why the formal look?

MB: [Laughs] It was actually a t-shirt tie!

SLAM: [Laughs] Ah, I couldn’t really pick that up from the video for some reason. Tell me a little bit more about the parade—it was your second championship but you were on a boat with your family, which must have felt extra special.

MB: The parade was insane. Our daughter just turned 5, so these are probably going to be her earliest memories and she will be able to remember the parade forever, which means a lot. I remember when we got to the Conference Finals, her school year ended. She knows that when school ends, it is time to come to New Hampshire for the summer.

After her last day of school, she was asking, “When are we going to New Hampshire?” I was like, Well, it may not be for another month. I explained to her how we were in the Playoffs and if we keep winning, it will delay us from getting to New Hampshire. But then I let her know that if we win the Championship, we get a Championship parade. So then for the next month, that is all she lived for, the Championship parade. I don’t think anyone in the world would have been any more devastated if we didn’t win it than her.

SLAM: Amazing. Did that provide any extra motivation for you?

MB: That was one aspect for sure. I don’t know how I would have broken the news to her if we somehow lost.

SLAM: The Whigs, Kevin Devine and Okkervil River are performing here today but besides them what else have you been listening to?

MB: I love the new Antlers album. Sad but beautiful music. Absolutely love the new War On Drugs album. That is probably my favorite album of the year so far. If anyone can dethrone that album in my mind they would have definitely earned it.

Learn more about Matt Bonner’s and Luke Bonner’s Rock On Foundation on their website and check out pictures from the Spurs Trophy Tour in New Hampshire on the Spurs’ website.