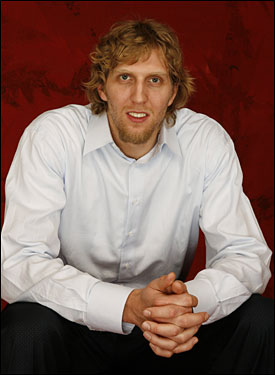 The regular season jumps off tonight (finally!), but before that happens, we’ve got to wrap up our Team Previews.

SLAM: How devastated were Mavs fans after the Finals?

WC: Huh? I don’t know what you’re talking about.

In other words, most of us still aren’t ready to talk about it yet because it’s just too infuriating or we haven’t yet figured out what happened. I am finally beginning to acknowledge they lost, which I think is step one.

Is it fair to call Dirk the best Euro import of all time at this point?

It would be almost impossible to argue against Dirk. In just one more season than the best retired European, Arvydas Sabonis, Dirk has already surpassed his assist total by 500, blocks by 160, rebounds by 1500 and point total by a whopping 8000. Dirk will pass Vlade Divac in career points this season in just half the time. Divac has a huge lead in career rebounds, but with Dirk averaging more rebounds per game over his career than Vlade it’s only a matter of time until that record falls as well. Drazen Petrovic’s NBA career was too short and Detlef Schrempf never averaged more than 20 ppg, which Dirk has done the last six seasons. Dirk’s stiffest competition for the title of best European player might come from active players like Tony Parker, Andrei Kirilenko or Pau Gasol. However, none of those players have ever been named All-NBA first team which Dirk has accomplished the last two seasons.

This team looks primed to make a return to the Finals. Have they made enough moves to get them back there?

Even finishing second is a difficult task to duplicate. In the last 26 seasons, just seven teams who lost in the NBA finals have made it back the following season. Four of those seven went on to lift the Larry O’Brien Trophy. The Mavs have a very realistic chance of being the fifth. Their core remained intact over the offseason and is made up of players in their prime (Dirk, Jason Terry) and young players who are still improving (Devin Harris, Josh Howard). They’ve got offense. They’ve got defense. And now they’ve got playoff experience.

Is Cuban’s act wearing thin in Dallas, or do Mavs fans still enjoy his antics?

I would say the majority of Mavs fans are behind Cuban 100% for the simple reason that they share his biases. What sounds like an obnoxious complaint about the refs to some outsiders just sounds like a true statement to many Maverick supporters. This offseason his “antics” began to be looked at differently for the first time when Dirk Nowitzki publicly came out and said that his sideline shouting was distracting. But as long as the Mavericks are winning, I don’t expect Cuban to change or his popularity in Dallas to be in danger. Compared to former owner Ross Perot Jr., he’s a saint.

Alright, enough foreplay, how will the Mavs do this season?

I’m not really big on predictions, so I won’t say that this WILL happen, but… if everything goes right the Mavericks should be the 06/07 NBA Champs. Anything less would be another disappointment.