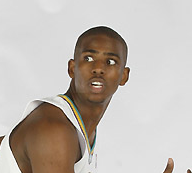 Is there anything better than the NBA Media day photos? No seriously, is there? Lang will make his post tomorrow poking fun at the photos, but really I see these as a bottomless pit of humor, so I’m getting involved too. These are my top 6 from a batch of 33.
This is kind of artistic. So his team doesn’t matter cause it’s blurry? Just the face, baby. Also the jersey is folded juuust enough to nearly spell out a different word.

Emeka Okafor does his Hamlet thing.

Ridiculous(ly awesome) hairstyle alert: TROY MURPHY. There are now two white guys on the Warriors with long hair. And Don Nelson is back in town. Dirk-Steve II?

Ah… this photo. What’s the symbolism? Will they fight for the ball? Do they each need one of their own? Will they smile this year?

Careful with that hand. The guy wrote a book trashing you a few years ago. How easy would it be to just…

Were they told to make that face? Or do they just know what lies ahead?