Melo and The Wire 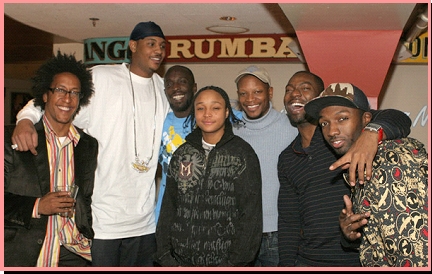 I don’t know how in the world Sam missed this–I’m pretty sure there’s a clause in his SLAM contract that forces him to mention The Wire every 2.5 hours–but we’ll cut him some slack just this once. It hasn’t been the best of times for him lately.

Jordan Brand hosted a special dinner for ‘Melo the other night in Denver to celebrate the M3, and the Baltimore native invited several cast members of The Wire (aka the best show on the television) to the party. Carmelo has never made it a secret how much he loves the gritty HBO drama.

Melo and the cast–I counted Snoop, Omar, Bubbs, Marlo, D’Angelo and Wee-Bey among those who attended–kicked it and posed for pictures. Melo’s mom and wife (LaLa Vasquez) came out to celebrate as well.

Pictures from the event are just below: