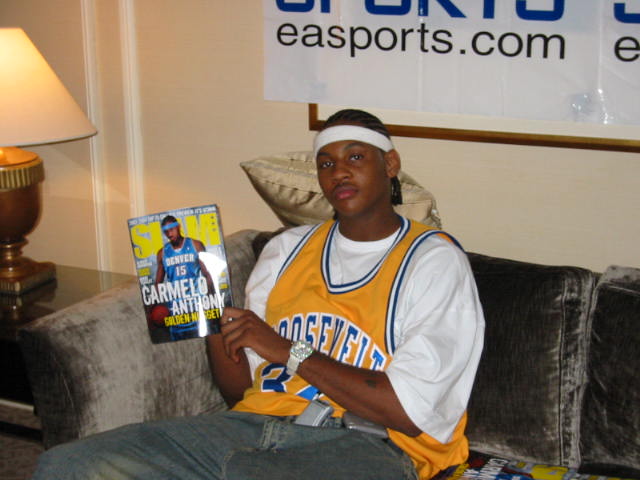 With Carmelo Anthony hours away from signing an $80 million contract extension with the Nuggets, he probably wasn’t happy to hear this: A car was pulled over Sunday night outside Denver after police said the car was being driven erractically. While the driver was found to have marijuana and was booked and released, the car was found to belong to Carmelo Anthony. (I think. This story says it was registered to the driver’s home address. This story and this story say it was registered to Melo Enterprises. I guess we’re going with the majority here.)

While Melo hasn’t done anything legally wrong here, at the very least he’s shown poor judgement by surrounding himself with people who are going to get themselves, and in turn get him, into trouble.

Last summer I interviewed Melo and asked him about the incidents from the previous year, when marijuana belonging to a friend of his was found in his backpack, when he was branded as a malcontent on the 2004 Olympic team and then when Melo made his infamous appearance in the Stop Snitching tape.

“Regardless of whether or not somebody writes a great story or a terrible story about me, they’re always going to write about what I did over the summer,” Melo said. “That will always be attached. Does it bother me? No, not now. At first it did. I was like, Damn, you know, I don’t want to be reading about this in every story. That stuff don’t bother me, now.”

I feel like I know Melo pretty well. I ghost-wrote every one of his rookie diaries that ran in SLAM, I’ve written two features on him for SLAM and he and I still keep in touch. And he’s a nice kid, one of the nicest people in the NBA. But there’s an interesting duality: While he’s still a kid (he’s still only 22 years old), he wants to be a businessman and have a corporate side, too. I guess we can thank Jordan and Jay-Z for it, but now, it seems like every entertainer and athlete want to be both a businessman and a business, man.

Right now, I think we’re seeing Carmelo’s in-between, the dissonance before those two diametric sides resolve themselves. Melo’s growing up, and he’s doing it on a huge, very public stage. He had the best year of his career last season and put in a ton of afterhours work with assistant coach Tim Grgrich, and I thought we were seeing the maturation of Melo. Now I’m not so sure.

I know Melo likes “The Wire,” but someone please send him the recent two episode story-arc on “Entourage” involving Vince, Drama, Turtle, E and their troublesome buddy Dom.

Hopefully he can learn something from it.